Did You Ever Have One of Those Days?

Yup, it's happened again. I got rolling on a story and low & behold --- I got interrupted in the middle of a thought. Who knows what it was. A phone call, a child wanting dinner, husband asking me to make a pot of coffee, or maybe I got sleepy? Whatever the case, I stopped writing on this story and have absolutely no clue where I was going with it. It's called "Love Potion" for lack of a better one. I don't remember when I started it. I had totally forgotten it existed until I was backing up my files. Anyhow, here it is!

Coming Up on Dellani's Tea Time! 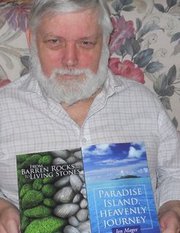 Jon Magee - My youth has been very nomadic, having been in 14 schools by the time I had completed my secondary education, and by the time I reached the age of 30 was never anywhere more than 3 yrs max from birth. Reflecting back, I notice that I was at:

It seems that wherever there was trouble there was one common factor ............... ME!! However, it has resulted in having plenty of material as a writer, writing about situations as they really are on the spot.

I am currently a Baptist Minister in Scotland, am married to Joan, and have 3 daughters, 2 sons, and 5 grandchildren

I have 2 published books. "Paradise Island, Heavenly Journey" tells of life in Singapore in the 1950's, but also includes the stories of local people who lived through the horrors of the occupation by the Japanese. Very topical this week, the 70th anniversary of the fall of Singapore.

"From Barren Rocks to Living Stones" tells of a Bitish teenager trying to work through the issues of living at the heart of the terrorism in the middle East of the 60's, and the British evacuation. A true story, I was that teenager.
at February 09, 2012 1 comment: