I Love Dialogue from Snowed by Dellani Oakes 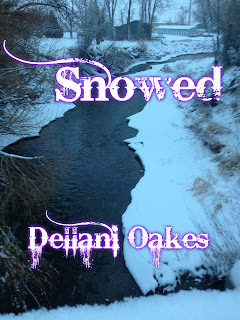 It's coincidence that Michael Reuben ended up in Cheyenne, Wyoming. He had car trouble on his way to Alaska, and decided to stay. It's not coincidence that he hit the road as soon as he could, in order to get away from his mother. What can you say about Ma? She's controlling, plays favorites with her kids and is the Queen of the Guilt Trip—and she's on her way from New York City to visit. She's bringing a man with her, and his daughter, Sarena. Knowing how difficult his mother is to travel with, Mike conspires with Sarena to make it an easier trip.

"Am I on speaker?"
"No." Sarena sounded kind of surprised.
I lowered my voice to nearly a whisper. "Is she making you completely insane yet?"
"You can talk a little louder. We've stopped again. She's in the bathroom."
"So?"
"Yeah, somewhat. Poor Daddy. She doesn't like the interstate much."
"Tip for future reference, Ma doesn't like much about road trips. Whose idea was this fiasco?"
"That I don't know," she said evasively.
"I'm sure he's regretting it already."
Sarena giggled, dropping her voice. I heard the car door open and shut. "You can believe that! I think he regretted it before we even got out of the City. I thought her backseat driving was going to make the poor man blow a gasket."
"Get her talking about her soap operas. It will distract her for awhile. It might make you crazy, but it will keep her off your dad's case and give him a break. When you stop in town, and you will, pick up some gossip rags and celebrity magazines. You'll have a little peace. Also, slip her some Dramamine or Benadryl."
Sarena laughed loudly and I immediately liked this woman. If she could laugh at my devious plans to keep my mother subdued, she was my kind of woman.
"You're evil, Mike. I knew I'd like you. I wish we'd talked to you about this before."
"I can share these tidbits with you because you're not the man dating my mother. Could you imagine me telling him this?"
"Daddy would blow a gasket, for sure. Anymore tips?"
"Got any soft music? Play something quiet, she'll fall asleep. She likes Patsy Cline and stuff like that."
"I'll see what Dad's got in the way of CD's. He's only got a few. So, what kind of music to you like, Michael?"
"Depends on my mood. I'm more of a heavy metal guy, but I'll listen to just about anything if I'm in the mood."
"And if your mood is frisky?"
"Now you make me sound like a puppy. I promise, I'm all grown up and potty trained."
"You're evading my question."
"It's a fairly personal question. Maybe I'm shy."
"You? I venture to say there's not a shy bone in your body."
"Not so much. I'd invite you to find out, but that's maybe not the most polite thing to say to a woman I never met, huh?"
"One thing you'll learn about me, Mike. I'm not awfully shy either. I've seen your picture," she left that statement hanging.
"Which one?"
"The one at your brother's wedding."
I was best man under protest. I looked pretty damn good in the tux though. She must have thought so too.
"I didn't even know you existed until my mother called me last week. I'm not up to speed on this whole thing."
"That's okay. You look like a man who can keep up."
"I try not to disappoint."
"Cheese it," she whispered huskily, sounding like Bugsy Malone. "Your Ma's coming."
"Then I'd better say goodbye. Remember what I told you."
"Thanks, Mike. I'm looking forward to meeting you in person."
"Me too. Call me if you need anymore tips."