This is a story that I wrote at the suggestion of my sister. She thought I should write about vampire caterers who solve crime. Challenge accepted. Meet Drea Barr and her husband, Kirk Nunne. The are the premiere caterers in the city, specializing in worldwide cuisine. However, mysteries can catch up with you around any corner, no matter what your line of work. 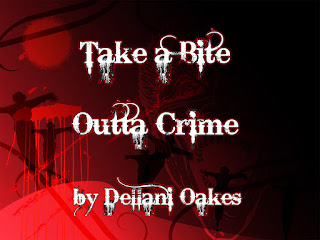 Drea Barr and her husband Kirk Nunne were the most exclusive caterers in the city. They had spent the last seven years building their business working hard to gain a stellar reputation. Now, they were ready to launch an expansion that would take their reputation to new heights.
Opening the blinds across the plate glass widows with a smile, Drea turned on the Open sign. Flinching as the sun glinted off the cars parked outside, she angled the blinds. The glare was cut to a manageable level. Turning back to the shop with a proud grin, she admired the interior. She'd worked hard to create an old world charm.
The floor was cobblestone. The walls were stucco with brick lined arches and alcoves. Bottles of wine and preserved vegetables in a variety of bright hues caught the eye, moving it happily around the interior. The focal point was the French colonial kitchen where Kirk demonstrated his skill, presented the food samples and held cooking classes.
Drea's decorative abilities and business savvy had brought them the recognition that Kirk's cooking deserved. His skill was unmatched by any other chef in the state, maybe even the country, possibly the world. He had studied long and hard to master every type of cuisine possible. He and Drea offered the widest variety of dishes. Want appetizers from France, entrees from Spain and desserts from Luxemburg, Japan & Belgium? Barr Nunne Catering was the place to go.
Kirk came in, taking her in his arms, nuzzling her neck seductively. They kissed a moment, waiting for the inevitable call for help from the main kitchen. For a group of highly trained professionals, they certainly fell apart if Kirk so much as left the room.
"Chef!" It was Margo, the sous-chef.
"Coming!" Kirk bellowed. "Why did we choose a business requiring such early rising? I'm a night person."
"Aren't we both?" Drea giggled, holding his arms around her. "Just think, our dream is coming true."
"My only dream is spending forever with you."
They kissed again, longer this time. The call came again.
"Chef!" Margo sounded even more upset.
Kirk pulled himself away reluctantly. "Hold that thought, my love. I'll be back."
In the kitchen, all was chaos. Margo was in a dither, furious over something as yet unrevealed. Cursing loudly in French, she paced restlessly.
"What's wrong, Margo? You don't usually start to bellow this early in the day."
"The fish truck is very late. We are to make bouillabaisse for three hundred. How am I to do so without fish, eh?"
"Jay is never late. Did you call him?"
"Of course! Voicemail!" She made a disgusted noise, throwing up her hands.
Kirk called the fish market himself, also getting voicemail.
"Strange," he commented. "It's not like Jay to be this late without calling. And he always answers his phone. Maybe his truck broke down. I'll go over and get the fish."
"Thank you!" Margo air kissed both his cheeks.
"I'll be back soon," he told Drea. "Hold the fort."
"Don't I always?"
Kirk drove to the fish market only a few blocks away. Jay's truck sat by the loading dock, the rear doors flung wide. The door to the store was also open. Kirk parked his van and got out. The first thing that struck him was how quiet it was. There should have been a lot of activity.
"I wonder if it's a holiday or something? No. If it is, why would it all be open?"
Approaching cautiously, he entered the shop. The back room was a disaster. Crates were broken open, fish and ice scattered over the floor.
"Jay?" Fingers of doubt crept up his spine. The scrape of metal behind him made him stop. Only one thing made that noise. Someone had drawn a knife. Kirk raised his hands slowly, ready for attack, but none came. Instead, a low moan reached his ears. Risking a glance over his shoulder, he saw no one behind him.
Lowering his hands, he followed the sound to the cooler. Jay lay on the floor in a pool of blood. Recoiling from the odor of fish and human blood, Kirk forced himself to advance. Whipping out his cellphone, he dialed the police.
"Emergency operator. What is your emergency?"
Kirk gave her the particulars.
"Sir, are you inside the premises?"
"Yes, ma'am. That's how I found Jay."
"Don't touch anything. Leave the building immediately."
"He shouldn't be alone...."
"I have three units on the way. Leave now. The perpetrator could still be there."
Suddenly realizing how stupid he was for going in the building alone, Kirk walked carefully to the back door. He heard sirens approaching and saw flashing lights outside. Raising his hands once more, he walked out the door.
"I'm the guy who called," he said loudly. "I have identification in my pocket. I'm reaching for it."
Slowly and smoothly, he pulled out his wallet, he held it where the police could see it. One young officer stepped forward, taking the wallet. He examined the license carefully. Nodding to his companions, he handed it back to Kirk.
© 2019 Dellani Oakes
To Buy Dellani's Books
For More About Dellani