First Meeting from Author of Love by Dellani 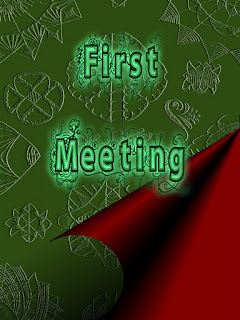 Blake is on his way to Key West, when he witnesses and accident on I-95 just south of Daytona. Worried about the passenger found in the wreck, he heads to the hospital and is waiting at the emergency room for the doctor's report. Little does he know that he's about to find the love of his life.

The doors behind and to my left, opened. A doctor stood there, her scrub top mussed and sweaty. Light brown hair escaped under the edge of her surgical cap.
"Are you the guy waiting for news on the truck wreck girl?"
"Yes. Blake Arbuthnot." I smiled, holding out my hand.
"Dr. Grace Healey." She held out her hand, taking mine.
She was a pretty, little thing. Let me clarify, before anyone jumps on me for that sexist sounding remark. I'm a big guy, about six two. To me, anyone under five foot eight is a little thing. This girl was probably five four, tops. My hand circled hers, looking more like a bear paw than a hand. Tanned and well muscled, it was a stark contrast between it and her ivory colored one. She smiled up at me and I felt my heart flipflop. Then I noticed the wedding ring on a chain around her neck. My heart plummeted and the happy dance that had started in my pants, stuttered to a halt.
"How is she?" I was still holding her hand. She didn't take it back, so I waited, suddenly feeling like a social inept. Then again, if I took my hand away....well, it was awkward.
"She's doing as well as can be expected. She was pretty messed up." She took back her hand, gesturing to a chair. We sat side by side in the waiting room. "Did you know her at all?"
"No. Never met her. Just saw the wreck and stopped. I didn't even know she was in there until they pulled her out. Why?"
She glanced at Rose and decided it was safe to talk in front of the older woman. "We think she's been—assaulted. We aren't a hundred percent sure, but I did a rape kit just to be safe."
"How can you not be sure? Isn't there—evidence?" I shuddered. The idea that pretty, little girl had been violated, was repugnant to me. Men that rape are the lowest of scum and should die horribly. If it was the guy in the truck, he had paid for his sin.
"There were some indications. She was pretty banged up by the wreck. Doesn't look like she was wearing a seat belt. We think she might have been asleep, or unconscious, in the back. Being that relaxed probably saved her life."
"Poor kid. I don't know what help I can be, but I'd sure like to see her when she's able to have visitors."
"Are you from here?"
"No. I'm from Natchez, Mississippi." It's not exactly Natchez, but as close as may be. I saw no reason to belabor the point. People have heard of Natchez.
"I knew you didn't sound like a Florida boy."
"No, ma'am." My Southern comes out when I flirt, too. I winked at her. Married or not, she'd just saved that girl's life. And she was pretty—damn pretty. "You from around here?"
"No, California. We moved here a few years ago."
She and her husband. Damn.
"Anyway, if you'll leave your number with Rose, I'll make sure you're informed when she's awake and able to have visitors. I need to get cleaned up. Sorry. I wanted to give you the information as soon as possible."
"Not a problem. I've worked as a first responder for five years. I've seen worse."
"I'll bet you have. Thanks for your concern, Mr. Arbuthnot." She held out her hand again.
I shook her hand again, admiring the strength in those small, long fingered hands.
"And thank you, Doctor Healey." I kissed her hand.
She blushed, smiling at me. Her eyes were an amazing shade of blue and twinkled. How I wished she wasn't married. Ah well, the beautiful ones get snatched up first. She made to rise and I jumped to my feet, helping her up. Slowly letting go my hand, she headed back to the ER.
Rose watched all this with a smile and raised eyebrows. "Well, I'll be!"
I frowned, tilting my head in question.
"I haven't seen Grace smile in a coon's age. Poor girl. Her husband was killed in an accident a few years ago." She shook her head, red waves hardly moving, but her dangling earrings did quite a dance by her large, square face.
Not married? Hmmm....
"I'm so sorry to hear that. It's a terrible thing to lose someone that way."
"Yes, it is." Rose sighed, smiling. "You made that girl blush! What on earth did you do?"
I took Rose's hand, brushing her fingers with my lips before planting a soft kiss on the careworn knuckles as if it were the soft, delicate hand of a fine lady. Rose blushed too, giggling.
© 2017 Dellani Oakes
To Buy Dellani's Books
For More About Dellani