Tear Jerker from He Needed Killin' by Dellani Oakes 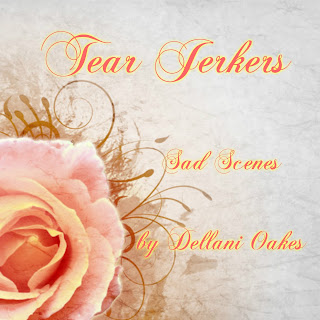 Dill Hamilton lost his parents when he was very young. Raised in the foster system, he's never known if he had family or not. If so, why didn't they take him in? Now in his twenties, he's found them, quite by accident.

"I have grandparents?" Dill gasped. "Why didn't they take me in? Should I contact them? I don't even know them. Why wouldn't they take me?" Angry and disappointed, he wanted to throw something.
"We don't know the reason," Joy said. "But does it do any damage to ask? You didn't have them in your life before. If you don't afterward, it's no big thing. But if they are happy to see you, then you have something you didn't—family."
"What if they don't want to see me? What if they don't believe me?"
"You look just like your dad," Sid pointed out. "And you look a lot like Gramps there. I don't think that's an issue. But you should pursue this."
"I know if it was me, I would want to meet my grandson," Flynn replied quietly. "I hope when my daughter finally marries, she finds a man just like you."
Andi walked in about that time, clearing her throat. "I couldn't help but overhear.... And I took the liberty." She handed the phone to Dill. "Press the green button to connect."
He didn't react right away, so Haylee took the phone and pressed the green button, handing it to him.
"Hello?" an older man's voice said. "Hello? Is there something wrong with this phone, Martha?"
"Hello?" Dill said shyly. His voice sounded high and childish. He cleared his throat, speaking again. "Is this Nigel Hamilton?"
"Yes. Who's this?"
"I think—I think I'm your grandson. My name is Dillon Hamilton. My mother was Caroline...."
"Dill?" A tortured sob ripped from the man's throat. "It's really you, Sonny? We've been looking for you for years! Honey, get on the extension. It's Dillon's boy."
"Sonny?" a woman sobbed into the phone. "My little sunshine? Where have you been all this time?"
"Nona?"
"Yes! Yes, he remembers. Nona a Papi. Where are you? How did you get the number? We have to meet. Honey!"
"Slow down, Mother. Where are you, Sonny? Are you all right?"
"It's such a long story. Can we meet up for dinner?"
"Absolutely. You come to the house."
"I've got some friends with me. I thought we should go out."
"Whatever you want. Where would you like to meet?"
Dill named a nice restaurant not far from their home. He'd often eaten there when he worked for RJ. It didn't require a reservation.
"We'll meet you there in an hour. I can't believe it's you!"
The older couple hung up. Exhaling slowly, Dill wiped tears. "I have grandparents," he whispered.
They pulled up at the restaurant, once again in the limo, and Ray found a place to park on the far side of the lot. As they walked toward the restaurant, a Lincoln Town Car pulled up in a handicap spot and an older man got out. He was so like Dill in appearance, it was like looking in an aging mirror. He walked to the other side and set up a walker before helping a woman out. The group approached as he closed the door behind her.
"Nona? Papi?" Dill said, dashing forward.
"Sonny!" the woman called, holding out her arms.
He hugged her gently, not wanting to hurt her or knock her down. His other arm went around his grandfather.
"You're the image of your daddy," Martha Hamilton said. "But I see your mama's face in there, too. You have her eyes, that dark, mysterious green." She patted his cheek fondly.
© 2018 Dellani Oakes
To Buy Dellani's Books
For More About Dellani