He hadn't seen her in 10 years, but there she was, dressed in black leather, straddling the Harley...One Night in Daytona Beach by Dellani Oakes - City Nights Series #17 from Tirgearr Publishing 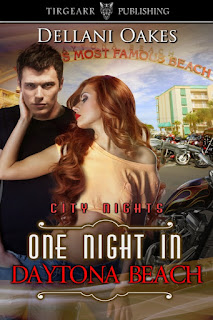 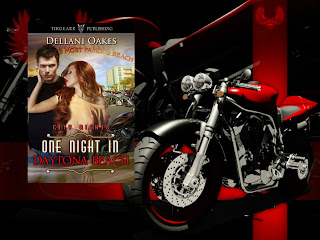 Excerpt from One Night in Daytona Beach


Long, dangerous legs, an ass that wouldn't quit, lush curves clad in skimpy black leather, flaming red hair wafted on the breeze while the rumble of a thousand Harleys filled the air. He couldn't draw his eyes from the gorgeous redhead, whose hair reminded him of the flames on the side of his bike. Heavy metal music thrummed from gigantic speakers, banging and echoing from the sides of the nearby condos. Cameras snapped, his included, as she draped herself over the motorcycles being raffled off for charity. The line to register wound around the parking lot.

"I'd like to rev her engine," one man said as he stuffed his tickets into his wallet.

"Full throttle," the man next to him laughed loudly at their joke.

Every man there was thinking the same thing, which was the entire point of having a sexy, long legged woman straddling the chrome studded leather seat. Leaning on the handle bars, she rocked back, her chest to the sky as she arched her spine. With a quick swing of her legs, she did a shoulder stand on the seat, then lowered her feet with agonizing slowness so that the toes of her high heeled boots pointed directly at the patch of stretched black leather between her thighs.

Draven nearly dropped his phone. The man next to him let his cup of beer slide from his numb fingers. Every man in the line eyed her with fascination. Though disgusted with the behavior of the men, the women couldn't help but stare too. They were amazed that anyone could do such antics on a motorcycle. The music continued to thrum and pound at them as they watched her routine. In a fleeting moment of coherence, Draven recognized it as Killing Strangers by Marilyn Manson. She was certainly slaying every man in the place with her sexy routine.

"Hey, buddy, your turn!" the man at the cash register called, snapping his fingers.Draven stumbled forward, his legs having lost the ability to move without conscious thought. He fumbled with his wallet and phone, trying to slide one out and the other into the pockets of suddenly too-tight jeans.

"How many?" the man asked, all business.

"Everything but American Express."

"You got it." He filled out Draven's details, rang up the cost and scanned his plastic.

"Does the girl come with it?" the man behind Draven asked. He was old and fat, not the kind of man a girl like her would even look at once. His words might have been said in jest, but coming from his slobby, heavy jowled mouth, it was seriously pervy. The men behind the table and near him in line, gaped at him, horrified.

"That young lady is my daughter," the man who handled Draven's transaction growled. "So you watch what you say."

"How's a man let his daughter act like a hoor in public," the fat man yelled, slamming a meaty fist down on the table.

Startled by the noise, the girl lost her balance as she rolled out of the shoulder stand. Toppling, she fell. Draven leaped toward her, covering the ten feet to the cycles, in a superhuman rush. He steadied her, helping her sit up slowly. Getting a good look at her face, he felt a spark of recognition.

"Jamie Humphrey?" He touched her cheek, brushing her hair from the corner of her full, red lips.

"Draven Wick? Oh, my God! Is it really you?" She clung to him, hugging him tightly.

"How many years has it been? Ten?"

"About that. God, you look fantastic!"

Clasping his face, she gazed into his golden hazel eyes. "Thank you for catching me."

"You're welcome. Are you okay?"

Others had gathered around, watching the scene unfold. When it became apparent that the woman wasn't hurt, the men at the desk went back to selling tickets.

"Of course not. He just says that so that men will leave me alone."

"How about fair time for the women?" a heavyset woman called from the line. "Let's see the hunk take his shirt off!" she whooped.

Women all over the parking lot cheered and whistled. Draven cast a saucy look at Jamie. The music had changed once more, pounding out Closer by Nine Inch Nails—the unedited version, he noted with a grin. Grabbing the bottom of his shirt, he raised it with agonizing slowness as his hips gyrated to the sexy music. Jamie played it up, running her hands under the shirt, rubbing his abs and tugging on the cloth with her teeth.

More cameras snapped and the women yelled loudly, screaming at him to take it all off. As he did a lecherous bump and grind, Draven strutted around the bike. Between the two cycles, he twirled his shirt, straddling it. Riding it like a hot woman, he continued to dance. Jamie hopped up, standing behind him, she ran her hands up and down his tight abs and hard thighs. Spinning to face her, Draven roped Jamie with his shirt, pulling her close to dirty dance with him. The song ended and he spun her under his arm, dropping her into a low dip, her back arched, breasts high. Red hair tickled the pavement as he raised her with one arm. Faces mere inches apart, they tried to catch their breath. It took some time before they realized that the line was now three times what it had been. Women ringed around them, waving money at Draven.

"You grew up nice, Wick," Jamie said, taking a step back. Her hand drifted down his chest to the top of his jeans. Eyes wide with delight, she dangled her fingers by his zipper. With tantalizing deliberateness, she touched the fabric that strained across his throbbing member.

"You keep that up, I can't be responsible," he whispered.

"You keep that up, I can't be either," she replied.

"I really wanna kiss you, Jamie."

"On the bike," she suggested. "I get paid a percentage of what they bring in."

Laughing, he picked her up, putting her on the motorcycle, facing the rear, straddling the engine. Draven took his time swinging one long, muscular, jean-clad leg over the seat. Scooting him forward with her feet, Jamie wrapped her legs around his waist. Laying her back, Draven teased and coaxed her mouth, his tongue tickling her lips. With a decisive lunge, he raised his body, grasped the handlebars and kissed her. Until that moment, Jamie had thought his antics were all for show. A consummate performer, he knew how to work a crowd. But that kiss wasn't pretending and the rock hard bad boy in his pants wasn't a prop.

He didn't linger over the kiss. His timing was, as always, superb. Leaning back, Draven swung his leg off the cycle, standing in one fluid motion as he held out his hand to her. The crowd went wild. The men at the table had to scramble to accommodate the line, bringing in extra help.

Draven stood near Jamie, hoping to kiss her again. Instead, everyone wanted pictures with them and the bikes. Most of them gave tips, some wanted autographs. They all wanted them to kiss. Draven worked the crowd, giving them just enough to keep them asking for more.

"Do you think any of them recognize you?" Jamie asked, her smile toothy and wide.

"Won't they shit when they figure it out?"

He chuckled, kissing her cheek by request. "Right in their pants. You smell amazing," he said, nuzzling her neck all on his own.

Shivering, she held his face as directed, giving him a kiss. "Me, too."

They straddled the bike again, with her in front, holding the handlebars. His long, sinewy thighs clenched against hers from behind.

"Is that a yes or no? I don't speak Biker Babe anymore."

"Does he think that?"

Jamie blushed, turning her head to look at him. "Why all the questions, Wick? Got some burning desire to know all my secrets?"

Draven nibbled her neck, cheating the angle a little, so he was still camera ready. "I've got a burning desire, Humphrey, but it isn't about your secrets."