Vengeance is Mine Part 1 by Dellani Oakes 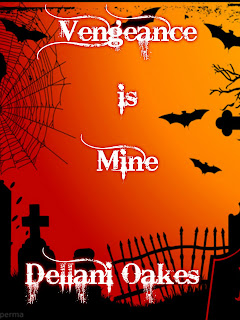 Vengeance is Mine is a step in a different direction for me. I originally wrote it for an anthology, but changed my mind. I thought it would be a fun way to herald Halloween. So sit back, sip your favorite hot beverage, and enjoy a slightly creepy story from me to you!

It's cold here in October. A scattering of snow already covers the ground. Funny, I don't remember it being quite so cold when I was alive.
Perhaps an explanation is in order. I am dead. Or at least I was. I remember taking my final breath. Time passed, I assume my body was processed as is acceptable by law. I awoke in a coffin in a crypt and cannot but wonder how I came to be there. I have no memory of the time between, not even of a sojourn in Heaven, Hell or Purgatory. There was a vast nothing when I closed my eyes for the last time, until I woke again.
I am dead. I assure myself of this fact in that I have no pulse, nor do I breathe. I stand in this freezing cold, no mist of steam comes from my mouth and nose. I do not inhale or exhale. I do feel cold, though perhaps that is simply me and not the environment at all?
This state of physical limbo, in which I find myself, is quite inconvenient. My home was sold, my belongings given away. I have no way to clothe or feed myself. Then again, I have no need for food, being dead. However, a warm coat would not go amiss. I have yet to see my image in a glass. I hope that it's not unseemly, for I would welcome someone to talk to. If my visage is altered by my time in death, it would be terrifying to others, so I have kept to myself, wandering the cemetery aimlessly.
I tried to see my face in the brass plate of my tomb, but it's covered in lettering, telling all who care to look, my name and dates of birth and death. I was not yet an old man, being less than fifty, though more than thirty. I have no wife to grieve me, no children to put flowers by my tomb. I had a mother, my father gone these many years. I do hope she is well. Though I am dead, I take solace in the idea that she is still alive, remembering me fondly. Perhaps not so fondly. There were many times she and I did not get along. Not entirely my fault, though not entirely hers, either. Families argue, children defy their parents. Parents go out of their way to annoy their children.
So it was with my mother and me. She took umbrage to my choice of profession. I took offense at her scathing remarks of the same. However, when I was able to pay fully, in cash, for my home, rather than taking it out in installments, she felt differently. I became quite wealthy, dealing in antiques and, dare I admit even now, opium. This latter was kept well to ourselves, for not all consider the trade acceptable. Nor is it. Though one has to admit that feeding another's addiction is often quite lucrative.
But, I digress.
Taking a seat on a headstone, that of a Charles Marmont, no friend nor kin of mine, I watch the city slow its pace. The sun sets in magnificence, a blaze of red, orange, rose and violet. Situated on a hill, the cemetery has a priceless view. How wasted this is upon the dead, for we have no need of it. The living, who would appreciate it more, hardly notice, caught up in the bustle of their lives. I, having naught else to occupy my mind, have ample time to note that there was more red in it this time yesterday. Less pink, and a touch of fawn. I wish that I had my paints, for it would occupy me. I must admit that immortality is somewhat dull.
There is a rustle in the bushes. Rather than a dove or a wayward hare, I sense a presence. A person, alive and breathing, has entered my domain. A peculiar happenstance at this time of day. In fact, in the week I've been undead, this is the first person to grace this solitary setting. She doesn't see me, intent upon her destination. She moves quickly, as if the coming of the night frightens her. I would offer to accompany her, but a man, especially one who is undead, would very likely give her a turn. Then again, if she were to die of fright, she might provide a companion for me in my tedium.
I do not move or speak, merely watch her through night's eyes. One advantage to being less than alive, I do so tire of saying undead, is that I can see in the dark as well as I may in full daylight. As I say, I watch her walk through the gathering gloom, intent upon her purpose. It is then that I notice she has headed to my tomb! Why? I wonder. For she is no one that I remember from my life. Indeed, I had no special someone. A man in my profession does not often interact socially, except with a rather putrid underbelly of society. The women one meets in those circumstances, are hardly the type one takes home to meet mother.
“William?” I hear her voice call my name. “William, where are you?”
Do I answer her? She is obviously looking for me. Why should I answer? Surely, she cannot know that I am alive—undead?
“I know you're here, William. I raised you myself. Come, let me see you.”
“What need have you, of me?” I asked from behind her.
© 2018 Dellani Oakes

When do we get to read the end?