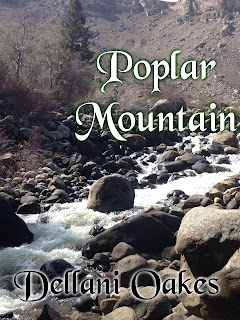 "Believe me, I don't intend to. But I do intend to marry Dollie as soon as we can, decent like. Don't want nobody thinking it's a have-to."
The doctor nodded, hands in his pockets. "Well, sir. You take it easy the rest of the day. Sleep and keep that hand elevated. Will, you make sure he does everything I said."
"I will, Doc. He'll behave if I've gotta sit on him."
The doctor laughed as he saw them out. They were a little surprised to see that chapel was ending and everyone was heading down to lunch at the dining hall. Will drove his brother down to see Dollie and tell her about Luke being sick. She and Patty said they'd be up to see them soon.
"We'll drive up in my car," Dollie said excitedly. "You haven't seen it yet!"
"I'd like that a powerful lot," Luke said quietly. "I love you, Dollie."
"I love you too." She kissed him. "You're burning up!"
"I know. Doc give me a shot and told me to drink a lot of water and Ma's soup."
"Good advice."
The men left, driving slowly up the mountain to their mother's house. Will helped his brother to bed and got him a glass of cool water from the kitchen. He and Luke had saved up money to buy their mother an electric refrigerator after the county had decided to wire houses in the district and supply them with power. Electrical lines came up the mountain from the school. Will and Luke wired the house themselves.
Lucius drank the water and sank back on the pillows with a sigh. Still feverish, he fell into a deep sleep. When his mother got home, she prepared a fever tea for him and forced him to drink every drop before she was satisfied.
The family took turns sitting with him, waking him from time to time to drink something. Rachel made chicken soup. When Dollie arrived, she spoon fed him a bowl of the hearty, rich broth. Afterward, it was time for another cup of fever tea. She persuaded him to drink that too, though he made awful faces over it.
"You look dreadful," Dollie said quietly, taking his hand. "You're so hot."
"I'm better than I was this morning. At least now I don't feel like I drank a gallon of Granddaddy's brew." He flopped on the pillow. "Only half a gallon," he muttered, trying to laugh.
"You rest now, Luke. I'll be right here." Her hand felt cool on his feverish brow. She washed his face with a damp cloth.
He fell into another deep, fever induced sleep. When he woke the next time, it was dark in the room. Someone lay in the bed beside him, but it didn't feel like Will's body. The person was too small and soft to be his older brother. He shifted restlessly, having lain in one position too long. The person next to him moved closer.
Leaning up on her elbow, Dollie smiled down at him. Her face was mostly in shadow, though enough light came in from outside for him to see her smile. Her hand on his face felt wonderful.
"You feel better," she murmured. "Your fever broke. You've soaked your sheets."
It was then he felt a cool breeze from outside and shivered. His pajamas and pillow were damp. His hair stuck to his head. He tried to get out of the bed, but became dizzy and light-headed. He flopped on the bed like a rag doll.
"You lie there and I'll get Will. We'll get the bed changed."
"Where are the boys?" He looked around at the empty room.
"Doc and Mrs. Starbuck are keeping them for the night. The girls are down with Patty at our place."
"Why? I'm not contagious."
"Oh, I know, but your mama thought you could use some quiet. We thought if the boys got a special night out, the girls should too. Tomorrow will be a hard enough day...."
Luke had forgotten that tomorrow was his father's funeral. He rolled on his side as Dollie went to the bedroom door. She put on a robe before opening the door and calling softly to Will. The older Henry brother came in, smiling. He held a pile of clean sheets and a chair. He helped Luke into the chair and gathered up the damp sheets that Dollie had stripped.
Together, they made the bed with fresh sheets and Will even gave Luke a different pillow, leaving his to air by the window. Dollie went out to fix a cup of fever tea and Will winked at his brother
"Boy, I can tell you're sick as a dog. Got a beautiful woman in the bed with you and can't do shit."
Luke groaned, sitting heavily on the edge of the bed. "Don't remind me! My own body betrays me. Nothin'...." He sighed as his brother laughed. "You wait till it's your turn," he griped.
"Here we go," Dollie said as she carried in the tea. "Drink it all," she admonished Luke as he took the first sip.
"It tastes horrible, Dollie."
"I know, but you need to take it all."
"I'd drink it a whole lot better if it tasted as good as you."
Dollie giggled, blushing. "You ought not to say things like that, Lucius Henry."
© 2019 Dellani Oakes