Sinfully Delicious by Kameron and Dirk


I'm delighted today to have Kameron Brook and Dirk Tyler as guest bloggers. Their book, Sinfully Delicious, truly is! 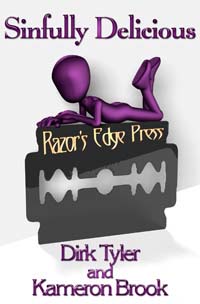 Book Summary:
Christine's been without a man for far too long, so she lets her BFF Jasmine talk her into speed-dating. Unfortunately, far too many of her dates are romantic non-starters -- in the worst way. But all it takes is one... and when the right man comes along, he's Sinfully Delicious.

It’d been two years, six months, and fourteen days since Christine had felt the loving touch of anyone but herself -- not that she was keeping track. Which was the reason she’d allowed her best gal-pal, Jasmine, to talk her into heading out tonight and giving the speed-dating scene a try… again.

“Woo hoo, Christine. Come in. Are you with me?”

Christine studied her completed look in the glass door of the Midnight Rendezvous. She held the phone tucked between her ear and shoulder while she kept tugging at the hem of her dress, which barely covered her ass cheeks. “Jasmine, I can’t believe you talked me into this get-up. I’m literally popping out all over.”

“Babe, you look hot, so quit the bitching and stop tugging on it.”

Christine’s hands stalled and dropped to her sides. “How’d you know what I was doing? Are you lurking nearby?”

Jasmine’s voice rose an octave. “Hello, best friend here. I know you, and I know you’re freaking the hell out. Do me a favor and relax, because any man would be lucky to have you. Now, hang up and get your sexy ass inside.”

Christine gave herself a final once-over and took a deep breath, releasing it slowly. “Thanks, Jasmine. You always know how to calm me down. Love you.”

Christine nervously inched her way over to the sign-up table, paid the twenty-dollar fee, picked up a nametag, and found an unoccupied chair. As the announcer went over all the rules of the event, she eyed the prospects and found several who looked attractive. Hope began to blossom. It seemed simple enough. Every two minutes a new man would sit down across from her and engage in a brief conversation. If she believed a connection was made, she would place his name on a card. The men would do the same, and if there was a match between cards, both parties would be notified through an email. “I can do this,” she mumbled.

The announcer rang the bell.

The first eligible bachelor, Bradley, sat down, and it was two minutes of pure awkwardness. His hands shook uncontrollably, and he wouldn’t stop apologizing. He refused to make eye contact and finally excused himself to the restroom, leaving her alone.

Christine couldn’t believe how badly the night was starting off. She tried to embrace Jasmine’s glass half full attitude and hope the next guy would at least remain seated for the entire two minutes.

Ding. A very handsome man with perfect features slid into the chair across from Christine. She noticed right off the bat he had no wrinkle lines, crow’s feet, laugh lines -- nada. She found that odd until he spoke. Then it all became clear. Unlike Bradley, he didn’t say “Hi” or offer any other pleasantries. His gaze traveled from her face down to her chest, head tilting left to right, and then he spoke. “You have a beautiful face and body, from what I can see, for a woman of your age, but if you ever decide to fix your trouble spots, I’d be happy to give you a discount.”

Christine couldn’t believe her luck. She already doubted her looks, and now this man she didn’t know was judging her appearance? Great, just freaking great. If she were Jasmine, she would’ve been spewing words that would make a sailor blush; however, Christine hated public confrontations. Instead she put on a fake smile. “Don’t bother writing my name down.” Their remaining time couldn’t possibly end quickly enough for her liking.

Ding. “Thank God that’s over.” One look at the surgeon, and she realized she’d spoken aloud. She opened her mouth to apologize, but before she could get the chance, he turned and walked away.

Prospective dates three through twelve were nice enough, but she knew they’d be no more than friends, and not the kind with naughty benefits. Her shoulders slumped in depression and she wondered why she’d let Jasmine talk her into this. A dozen men had come and gone but none lit a fire in her belly. Eyes downcast, she waited to hear the sound of a chair scraping the floor.

Instead, she felt cool glass press against her palm and a warm breath against her ear. “I didn’t know what you normally drink, but I sensed you needed something strong.”

Christine looked up into the most gorgeous eyes she’d ever seen. They were almost hypnotic, and his voice was equally distracting, drawing her in. She was clueless about how long she stared at him like a lovesick puppy, but it was long enough that another bachelor took his position for the two-minute meet and greet.

Spell broken, she addressed dreamy eyes first because she had to know his name. “Umm, yes, thank you, Mr…”

“You may call me Sin.” Then he stood upright and kept all his attention on her but clearly directed his words to the gentleman across the table. “If you were a smart man, you’d start the conversation by telling her how gorgeous she looks tonight. Let her know no other woman has ever looked lovelier in your eyes. That from the moment you saw her, you wanted nothing more than to feel her lips against yours, to touch her and be touched by her.”

Christine grew more aroused with each word Sin uttered. She’d come out tonight looking for a spark, and damn if she hadn’t found a five-alarm fire. Did Sin realize the effect his words were having on her?
He winked, and her silent question was answered. Damn him, he knew exactly what he was doing to her.

The other bachelor cleared his throat. “Yeah, thanks for the advice, but I don’t need it. I’ve got this.”
Sin’s face tensed up. “Not yet, you don’t.”

Thank you so much for having us here.

I'm delighted to have you here, Kameron. I see the interview finally decided to show up! :)