A Brief Interview by Thornton Larson 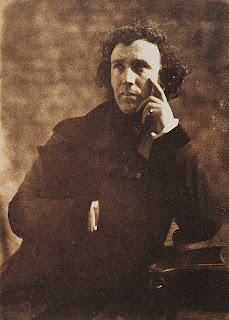 I was recently allowed to accompany Charles Latimer, the amazingly wealthy Hotelier on his quest half way across the globe to visit with the wild men of the far north. I am not yet at liberty to express the purpose of Mr. Latimer's business there, but I can share an interview I was allowed with one of the honored Northern Lords about the mysterious whispers afoot in their country.
TL: Who and what are you?
IY: I'm Idris Price Yates, a Hunter and Lord of the Wyveria.
TL: Can you explain what that means exactly?
IY: The Wyveria are the people who live far to the north and Wyveria is also the name of our land. I come from a small village called Drysor Y Ddraig, it means Dragon's Treasure. It is the King's village and all the noble houses are in that village. I was noble born and have earned a place amongst the Hunters of our people due to my power, my ability to affect the elements, speak to wee creatures and slip my form from man to Dragon.
TL: That's amazing, is your nation a large one?
IY: No. We are perhaps 10,000 in number and not many can change their form. That is why it is so greatly prized.
TL: I see… and you are one of those that can. I’ll have to take you at your word on that.
IY: You should, yes.
Is it true you found a man buried in the ice from before the great cataclysm? What was that like?
IY: Yes. We'd gone out hunting a bear that was ravaging the village. We tracked it near the ice caves. When we went into the caves to see if it was home, we found a large block of ice that had floated in and gotten stuck by way of an underground stream fed by the nearby river. Inside the ice was a man. We thought him dead at first, but then I sensed something, his magic. So we built a fire to thaw him. What was it like? It was odd and fascinating. He is an interesting man, an educated one and full of tales of the world before the great cataclysm. You should hear them.
TL: Perhaps one day I will; I would be most interested. I've heard that there was some excitement in your village recently; can you tell me about that?
IY: I cannot say much at this time...we are still looking into the details. However, our King Trevor Crewe was murdered. I have been tasked to find his killer.
TL: How do you feel about being put in the position you’re in?
IY: How do I feel? I am grieved at the loss of a man who was like unto a second father to me. Who saw to me and mine when my father was ripped from us without warning. Now he has been ripped from his family and I will see this wrong addressed.
TL: If you succeed, might you be rewarded by a position of honor?
IY: I already hold a position of honor amongst my people. If you speak of taking Trevor's place? That is not how such things are determined.
TL: I see, well I thank you Lord Yates for your time and sincere words.
IY: You are most welcome to them.
I could not draw more out of Lord Yates, but is this not enough to whet the appetite of our readers? Should we not all seek to learn more of the men of the north, who claim the ability to slip their skins and become dragons?
Thornton Larson
3rd May, 7013 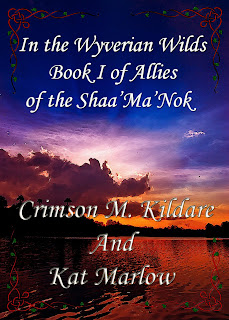 Excerpt of In The Wyverian Wilds

The Village of Drysor Y Ddraig was laid out at the foot a large, sloping hill. The back end of the hill and the far edge of the village were bordered by a rushing river that flowed over the edge of a cliff. It was a lush, green land full of trees, plants, wild life and small insects. A view filled with beauty and tranquility.
Jamie sat on the lawn behind the house of Yates looking out over the cliffs at the roaring water of the falls. He was lost in thought when the older man, Henry, who’d come with the visiting dignitaries walked over and sat down beside him. He looked up and offered him a small smile. His eye wandering over to see Idris still deep in conversation with Charles and …Val…Val was walking down along the edge of the cliffs on the far end of the lawn. He really, really needed to talk to Val, but where to begin?
Henry watched Jamie for a few minutes and then chuckled. “You’ve so many things on your mind at once you can’t form a single coherent thought about any one of them can you young one?”
“No, I guess I can’t. I…I just have so many questions…” Jamie answered.
“May I ask what sort of questions?”
“About how I got here to begin with…I mean yeah I was frozen and they thawed me out, okay…but how is that possible after all this time, without…any kind of medicine or science…with nothing to help them but a fire?
Henry looked at Val and then at Jamie and gave him a smile in return. “This is where you wish to begin? Talking with me, about the nature of things?”
Jamie spared a guilty look for Val whose back was turned to him in that moment. “I…I…yes, because I don’t know how to begin…anything else…”
Henry nodded as he errantly picked a few blades of tall grass and began to weave them in an intricate pattern as he considered the concerns mentioned.
“You have old knowledge Jamie, compared to what is known to most now. However compared to what I know and more importantly what Thera knows it is the knowledge of the young, of a child. Long, long ago, before the times your people were able to map out and attempted to explain with their analysis and sciences there was another world, another people. These people, they were the first ones, the first of all peoples, of all beings.
They were not like you or I or anyone you’ve ever met. They were beings of…possibility. They took form as it pleased them, from them came all the variety of life that has ever existed from the smallest to the largest, from the most benign and powerless to the most clever and powerful. These people had knowledge to be sure, but their knowledge did not come from learning or analysis, but from the source of all things. They were born knowing. They also had healing and power, but theirs was made of the essence of all that is. You would call this magic. They did not have medicine, science or tools, because they did not need them. They had will. There came a time when some of these first ones grew to like physicality, to favor various forms and they chose to take on these forms permanently. This is where life on this world as we know it now and as you once knew it came from.
Now I could explain this all in much greater detail, as I used to do for Charles and his brother Cedric when they were young, but my point is that Thera, the land, the earth herself she knew what was coming. She is part of all that is and is connected to it still. She knew that great rock in the sky would come and hit her. She knew the cataclysm it would bring, the harsh reality that would be brought to bear on the peoples on her surface. So she spoke to the Great Mother and together they began to make preparations…they began to rework the nature of the people so that they might survive. They rewove the power of their will for them, giving them back the magics they had abandoned long ago…
“Okay, okay whoaaa Nelly! So what you’re telling me, is that the Earth, who you call Thera, and the Great Mother…by which you mean the spirits of all nature and the planet re-engineered the DNA of the people to give them magic, because they would be robbed of all their tools and sciences?”
“Exactly.”
“Okay…And even “IF” I choose to believe that, it explains what happened to me how?” Jamie asked.
“Easily. You are sitting on the ground in the land of the Lords of Wyveria, a people who can slip their skin and become Dragons. A people who can cast spells and affect the elements, who can speak to the wee creatures and you find my explanation what…too farfetched? How does it explain you? Do you not listen when others speak to you Logan? Did you not yourself hear Idris say he felt you in all that ice, sensed you were there, that you were pulsing with life. Does that not ring any bells for you, as it were?”
“Are you saying that I…have some sort of…magic?” Jamie asked.
“As you said yourself, you were frozen in a block of ice for many thousands of years and yet you thawed out whole and undamaged, not even the biting of frost upon your fingers and toes. What else would that be, but a great ability to heal oneself?”
Jamie blinked, “You mean I can…regenerate?!” he asked startled.
Henry merely nodded and smiled. Then he looked at Val again. “You have it in you to be a great healer Jamie Logan, go start now. Heal with words, heal with your heart.” He said nodding toward Val and gave Jamie a small shove.