Today, the tour bus stops once more in Peterborough, Ontario. We're here to find out about Karen's book, "Dead on Arrival" and chat with Laura Hamilton, the story's heroine.

Laura Hamilton didn't know what she was expecting when she got up that Monday morning, but it sure wasn't finding a dead body in her living room. Yes, a dead man, apparently delivered sometime over the weekend, currently adorning her living room carpet. 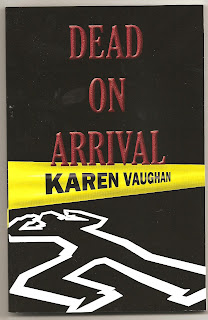 Jeff Gibbons, the inspector called to the scene, isn't quite sure what to make of Laura, but he has a gut instinct. Even if she does know the victim, she's not guilty. A fact which is brought to light when it becomes apparent that someone's out to get her.

Gerry, the building super, is a long term friend of Laura's. Insisting on protecting her, he takes Laura into his home to keep her safe. Soon, he's sharing his space with Laura and her Siamese two cats—Sean and Seamus.

No matter what she does, Laura keeps getting dragged deeper into this ridiculous set of circumstances. When more dead bodies show up, she decides enough is enough. She and Gerry do what they can to help Inspector Gibbons find the killer.

"Dead On Arrival" is a wonderfully lighthearted mystery that moves at a lively pace. Vaughan's humor adds an interesting dimension to her story, keeping it from being too grim. Her dialog is sprightly, fleshing out the characters. Even minor players have very distinct personalities.

I enjoyed Laura and Gerry's amateur sleuthing as they muddle through, trying to keep Laura safe while they figure out who's trying to kill her and why.

Five Golden Acorns for Vaughan's debut book. I highly recommend it to anyone who likes a lighthearted mystery with plenty of intrigue.

What is your biggest fear?

I fear that one day all my amateur sleuthing is going to catch up with me. Gerry or I could get really hurt or Gerry could get sick of me playing Nancy Drew and leave.

What would you give up everything to have?

What is the biggest mistake you've ever made and are you going to be able to rectify it?

Hmm that’s a hard one but getting to involved in the Leena situation in OVER HER DEAD BODY. I could have been Killed and it nearly ended me and Gerry. I tried to lay off but again death found is in DAYTONA DEAD.

What food would you never eat?

Entrails- I don’t do liver, tripe, tongue or kidney –makes me want to yack

You've dressed to impress. What are you wearing?

Me a fashion maven? I am most comfortable in a pair of sweats and a t-shirt.

What one thing have you found unattainable thus far in your life?

Motherhood and a winning lottery ticket.

What is about to change for you?

I am not sure but Gerry and I are trying for that all important baby. The clock is ticking.

Where do you live?

We live in the north end of Toronto in Canada. We just moved from Scarborough.

Building superintendent for a high rise building and amateur sleuth as it turns out. Some even call me a corpse magnet.

What do you see when you look in the mirror?

Some one who is trying to find herself and who is insecure.

Who do you hate and why?

Not really hate but I do have a few people I would be happy not to see again. Tiny Todd Crawford (DEAD ON ARRIVAL), Leena Dubois Brown (OVER HER DEAD BODY) and Killer T. Ford (DAYTONA DEAD)