Happy Anniversary to the Man I Love! 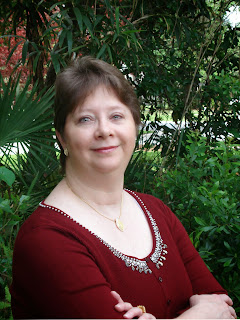 Normally, on a Tuesday, I'd be posting an excerpt from one of my novels. But, since today is my 34th wedding anniversary, I thought I'd post about my very own love story.
I was a senior in college, spinning my wheels, trying to decide where I was going to go and what job I wanted. I honestly had no idea what I was going to do with my degree in Theatre and Dance, and really had only a vague notion of actually looking for a job. I was sort of dating this guy, who wasn't really relationship material at all, and wondering where that was going, too.
One of my core Theatre classes was Costume Design. With this class, I had found my love and my focus. I enjoyed designing things for people to wear and building them from scratch. I learned to draw, a talent I hadn't previously cultivated, and was enjoying that, too. There was a fellow named Rick in the class. He was the only non-major in the class and everyone else thought he was weird. I thought he was cute and funny and we got to talking. We hung out, had coffee once in awhile and enjoyed one another's company.
One day, he said to me, “I have this guy you need to meet. His name's Joe.”
Dubious, I gave him a withering look. “Yeah? What's wrong with him?”
“Nothing. He's really cool. You'd love him.”
“Thanks, but no. I'm seeing someone.”
“I know. But he's not the guy for you.”
“No.”
We had more than one conversation like this, with him pushing and pushing for me to meet Joe. The wanna-be matchmaker wouldn't back off, determined to fix us up. Little did I know that Joe was getting the same treatment. He'd known Rick for several years and had been on the receiving end of his matchmaking before. Their conversation went something like this:
“There's this great girl in costume design, you have to meet her.”
“No.”
“Her name is Dellani. She's really cute, very smart.”
“No.”
“Oh, come on! You'd be perfect for each other.”
“No.”
“How many times have I fixed you up?”
“I can't remember. Too many.”
“How many times was I wrong?”
“Every time.”
“I was right that one time!”
“That couple tried to kill each other. No.”
Deciding he had to get sneaky, Rick waited until we were all at an S.C.A. (Society for Creative Anachronism) event. He'd talked Joe into attending, loaned him a costume and convinced him to work in the kitchen so he wouldn't have to pay the entry fees. At the feast that evening, he rushed over, grabbing my arms.
“Stand right there and don't move!”
Stunned, I did as he said. Soon, he dragged over this skinny, bearded guy with brown hair and glasses. “Joe, this is Dellani. Dellani, meet Joe. Y'all chat.”
And he left.
We stood there, staring at one another. Joe reached out and took my hand, kissing it. Suddenly, he shoved up my sleeve, put his fingers around my wrist and slapped the top of my hand.
“Wow, you have great veins! I could start an I.V. on you so easily!”
Odd. Very.
But I didn't forget him. And when the other relationship crashed and burned—horrifically, he was there to pick up the pieces of my shattered heart and put me back together. We married on May 24, 1982, and have been happily married ever since. We've had our good times and our hard times, but we're still together.

(Rick was our best man. And I still have great veins.)

i have always loved that story. Maybe soon I will share the how I met jim story.

What a sweet and funny story! :)