I Love Dialogue from Indian Summer 2 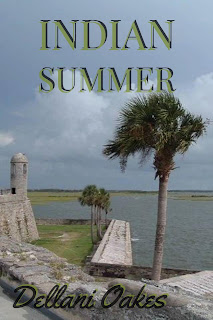 Indian Summer was re-issued on Friday, September 8, 2017. This sweeping historical novel is a must read! After Irena's wedding, Gabriella and Manuel are left alone for a short time. She has some questions for him, but isn't sure how to ask.

"You've a question in your eyes, my love."
I reddened, dropping my gaze. "Am I that obvious?"
"Only to me. Now what is it? There should be no secrets between us."
I pursed my lips and thought of the best way to phrase it. "Well, you know much about me having known my father for so long, but I know so very little about you. Much of what you told me just now, it was about your aunt. Tell me of you."
He smiled pensively. "Very well, and where shall I start?" It was more a rhetorical question, but I decided to answer him in any case.
"You could begin with telling me your age." I said, suddenly becoming interested in my shoes. To rid myself of fear, I tossed my head back, looking him squarely in the eye.
His contagious laughter filled the town, echoing off the buildings. "Ah, Bella, I thought you wanted the confessions of all my sins or something the way you're acting. My age? Well I'm older than you but not old enough to be your father."
I stamped my foot, startling the horses. "I'm being serious! You know much about me, nearly my life's story. I know you're an orphan and that you love me and—that you're well appointed."
He laughed even louder. "What a minx you are to say a thing like that! All right, you win. First, you make a guess. How old do you think I am?"
I looked at him appraisingly, considering. "Well, when I first met you, I considered you an old man. I would have said a few months ago that you were in your thirties."
His laughter subsided, a twinkle in his eye."And now?"
I thought again. "Well when you laugh it takes many years off you. But when you're serious, it adds a few years. So I shall go with an average, somewhere in the middle and say three and twenty?"
"Well, I could be, but then again, perhaps not. You've not considered everything, my sweet." He ticked the points off on his fingers, dropping the reins. The mares stopped moving as soon has he set them down.
"First, I'm a trusted aide to your father. Second, I'm extremely well educated and I speak several languages fluently."
He winked at me and I tapped him with my parasol lightly on the knee.
"And third?"
He considered a moment. "There is no third. No, I think we have covered the salient points. So, do you still think me three and twenty?"
"Well, given the evidence as listed, I would have to say more like three and thirty." I nodded to emphasize as if I meant it.
His reaction was animated and hilarious. "Three and thirty? Th—" He was incapable of speech for a long time, then very red in the face, he sputtered. "Is that what you really think? What kind of old lecher do you think I am?"
I suppressed a giggle with great difficulty. "I don't think you an old lecher in the least! But if a man of three and thirty were interested in a young lady of fifteen, he would certainly be one. I was teasing, my love. I don't think you're above three and twenty as I originally said." So saying, I sat quietly, waiting for him to speak.
"Well, as I tire of this game, I will tell you."
"You only tire of it because you're coming out poorly." I smiled sweetly.
He waved it off as unimportant. "Be that as it may, and I don't deny that's my motivation in part. I also must get you home soon. Very well, I'm not three and thirty, nor am I three and twenty. Given the ability to speak several languages fluently, as well as some Indian dialects of this area, I worked first as an interpreter. Then I became a liaison. Having other necessary talents, I obtained my position with your father at the ripe old age of seventeen. So therefore, my sweet, I'm a mere child myself."
I counted up the years he had worked for my father.
"You're one and twenty!?" I hugged him, regardless of the looks we drew.
His smile widened as he held me closely. "Why is that so wonderful?"
"Well it's silly, really," I giggled, blushing deep red to the roots of my hair. "But I didn't want you to be too old, for fear you would tire of me since I'm still so young."
He took my hands in his. "I assure you, Gabriella, I'd never tire of you were I three and forty."
© 2017 Dellani Oakes
To Buy Dellani's Books