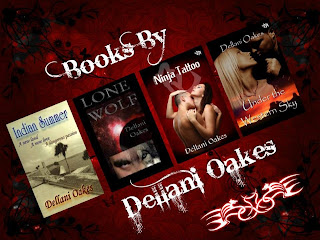 Authors look at life from a unique angle. What seems like a regular day to anyone else, presents opportunities to an author. Each event stays in our memory banks, waiting to be used for a short story, novel or poem. We withdraw from the bank as needed, adding to the balance of our stories.
I find myself going through my day, listening and watching, always thinking if something will eventually make it into a book. I don't consciously remember them, nor do I plan to add things, they just sort of show up.
It amazes my husband that every time I go out, I come back with a story. Whether it be a conversation that took place in the store, a near-miss accident on the road, or crazy people in the parking lot at the mall, I always have something.
Do these things happen to other people? Seriously. Does everyone have a crazy, drunk lady walk up to them in the mall parking lot and ask if her hair looks all right? She's obviously wearing a cheap wig, okay? It looks horrible. Do I say that? Oh, hell no! “It looks lovely,” I reply as I quickly get in my car and lock the door.
Did anyone else notice the old lady in Panera Bread who stood ahead of me in line? I doubt it, but it stuck with me so much, I finally had to write it down. The line was long and a young man ahead of us had on a black Pantera jacket. The lettering was pale yellow and a white skull was behind the 'T', making it look like it said Panera.
“Why do you suppose he's standing in this long line,” she asked her husband in a worried tone. “If he works here, shouldn't he be able to walk up and get whatever he wants?” She carried on like that for some time.
I couldn't let the poor old darling keep thinking that he worked there, could I? She was getting herself all worked up. So I spoke to her.
“It doesn't say Panera. It says Pantera. The 'T' is obscured by a skull.”
“Oh. What does that mean?”
“Pantera is a heavy metal band.”
“Heavy what?”
“Heavy metal – hard rock.”
“Oh! Fancy you knowing a thing like that.”
“I have teenagers,” I said, diplomatically. I didn't have the heart to tell the old dear that I'd been listening to Cowboys from Hell moments before walking into the store.
My daughter and I were once in Winn Dixie doing some shopping. She wanted a case of sodas, so we loaded up some Coca-Cola. A little further down the aisle, we saw Pepsi was on sale, so we backed up the cart saying, in unison, “No Coke. Pepsi.” Like they did in the old Saturday Night Live skit. An elderly gentleman walked around the corner just as we said that. I'm sure he thought we were both completely insane.
Though my daughter isn't an author, she has equally strange things happen to her. She called me once and told me some man had come up to her in the store. “Clearly, English was not his first language,” she imparted. “He smiled and said, 'How may I pronounce your name?'”
Another time, she told me she'd seen a man going down the street, talking in sign language. He was obviously having an argument with himself. He would stand one way, gesture and fling the comments at another person. Then the second person would reply – different stance, but same aggressive gestures. He will one day make it into a book.
Random people I meet at the grocery store have been included in several books, some of them, not too favorably. The old woman who purposely hit me with her shopping cart – she's there. The older couple who blocked the sweet potatoes and couldn't hear when I asked to get around them – they're in another. The kindly gentleman who gave me advice in the wine section, he's also there, but more favorably.
The point I'm making is that inspiration comes from a variety of sources, but the most important for any author is the ability to observe. Everything you see, hear, smell or feel can be used to enhance a story. Never pass up an opportunity to deposit in your memory bank.

Well you know what usually happens to me. I get asked to kill people off
but I do take things out of life and save it for a book. Like events of my first honeymoon may end up in a book.

Yep, I can relate. I created a scene for Eternal Bond where my main character is tempted to eat a crying baby. I got the inspiration from a neighbor who is overwhelmed with her naughty children.