Announcing One Night in Daytona Beach by Dellani Oakes 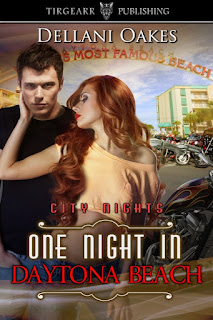 It's finally here! The long anticipated (at least for me) One Night inDaytona Beach, #17 in the City Nights Series from TirgearrPublishing, is Available Now! Grab your copy while it's still only .99 cents!
When I first heard of the City Night Series, I was intrigued. The parameters of 24 hour time frame and erotic romance, were somewhat daunting as I usually extend my stories over longer periods of time. However, I saw it as a challenge. However, I couldn't think of a city, that I had knowledge of, which could be in any way interesting. I've lived a lot of places, and visited more, but somehow I didn't think that One Night in Lubbock, Texas sounded quite as enticing as I might like. And then Troy Lambert wrote about Boise, Idaho and I knew that I could do it. Thank you, Troy!
My own city, in the Daytona area, isn't very large or exciting, though it is in the story. In fact, a very important facet of the plot takes place here in sunny old Edgewater. And yes, we really do roll up the sidewalks early—what sidewalks there are. Mostly, we don't have them. We are right on the Indian River, a stone's throw from the beach, as the crow flies. As far as roads, I have to go to New Smyrna for a bridge.
Once I'd decided that, I tried to find a backdrop to the action. I couldn't make their action the only events in the story. A friend suggested NASCAR, but I've never been and don't intend to, so I passed on that. However, there are two other major events around here: Biketoberfest and Daytona Bike Week. Since The Ninja Tattootakes place during Biketoberfest, I decided to use Bike Week instead. With that decided, I was off like a shot. I wrote the story in less than a week.
I hope you enjoy One Night in Daytona Beach and will check out all the other fantastic books in the City Nights Series. Swing your leather clad leg over that Softail and rev up your engine. Then hang on tight, you're in for a hot, fast paced ride!