Excerpt from This Year's NaNoWriMo Novel - So Much It Hurts 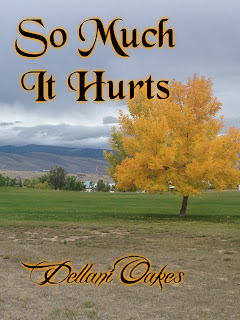 So Much It Hurts, my 2016 NaNo novel took me very much by surprise. For starters, I had little to no idea what I was going to write about. Usually, I plan ahead to a degree, but this year, I was stumped. I had an inkling of a love triangle (no, not menage) and even knew the three characters by name—something else that rarely happens.
Immediately, Pia met and was enamored with Flynn, but there was something about Yancy I hadn't anticipated—at all. I love how the book turned out, and eventually I may share it or I'll wait and publish it. I haven't decided. In any case, this is an excerpt from So Much It Hurts.

Flynn pulled himself to consciousness. His ears buzzed and rang. The room refused to hold still. Vision blurred, he stumbled to the bathroom. As he washed his hands and face, he examined himself in the mirror. His skin was drawn, scruffy cheeks sunken, dark circles around haunted eyes. Turning around, he saw claw marks on his shoulders and he had a vague recollection of having hot, jungle sex with someone, and knew it hadn't been Pia. Naked and ashamed, he stood with his face in his hands.
“What have I done?”
His bathroom door popped open and Yancy's angry face was framed by it and the door jamb. “Put on some pants. You have a visitor.”
“Pia?”
The door slammed shut as Yancy left without a reply? Flynn dressed hastily, wondering if he'd missed an appointment. He couldn't think of anything, but three days were a blur. Men's voices filtered from the living room, calm, reassuring. Didn't sound like he was in trouble. As the child of an abusive parent, he'd learned to read the danger signals. When laughter echoed knew it was all right.
The other man's back was to him, but Flynn would know Jeff Stanton anywhere. Yancy glanced over, raising his chin, and Jeff turned. His smile of greeting changed to a frown of deep concern.
“Jesus, Flynn! You look like you've been hit by a truck!” He tried to look more closely, but Flynn flinched away.
“Coffee?”
“No thanks.”
“I need coffee.”
“Boy, you need rehab. Coffee won't cut it.”
“Why are you here?”
“Lunch with me and Randi, remember?” He turned to Yancy. “How long has he been like this?”
“I spent the night with Pia. Someone had a party that didn't include me. Not that I wanted a bunch of super models sucking me off on the couch.”
“I did that?” Flynn cringed. “Fuck, I did that. I'm sorry—”
He took a step toward Yancy, who backed away, hands up to ward off his approach.
“Save your apologies for Pia. I came for my stuff.”
“What stuff?” Flynn had made it to the kitchen, but went back as quickly as he could.
“All of it. I can't live like this. Pia said I could move in with her.”
“With my girlfriend?” He stormed across the room, shoving Yancy back a step.
“Not anymore!” his friend bellowed. “You blew that chance when you blew that model!”
“She saw that?” Anguished, Flynn gripped his head, anger now self-directed. “What have I done?”
“Not what, who? Everyone! You'd have fucked a monkey, if one had been around.”
Jeff got between them, a hand on each chest. “Yance, lemme get this one.” He tipped his head toward the door.
Reluctantly agreeing, Yancy went back to Pia's. She was waiting in the hallway outside her door, Randi in the room behind her. Both women looked worried. Borage came around the corner, Oz trailing him.
“Go back home,” Borage pointed, gently commanding. “It's okay.”
“No.”
Knowing he couldn't get his charge to leave, he simply kept him out of the way. Jeff closed the door with a thud before advancing on Flynn.
“You, fuck-tard. Sit.”
“Coffee.”
“Screw coffee. This is your Come to Jesus. You feel me?” His tone and manner grew tough, aggressive.
Flynn's laugh whooped o ut. “This is great. The rich, pampered, pretty boy—going all street. You don't scare me, Jeff. I grew up in the hood. I ate hood rats for lunch.”
“Hood rats don't hold two black belts. You're tough, and hung over. Think I can't take your ass down?” He yanked off his jacket. “They've got a gym here. Let's throw down!” The jacket hit Flynn in the face.
“Let's do it!” Furious, Flynn raced to the stairway, shoving past Yancy and Borage. The door to Pia's rom was open and she watched from the safety of the doorway.
“I've got this,” Jeff said as he stalked past. “My friend needs a whoopin'.”
“Don't hurt him!”
Icy blue eyes met hers. “Some men see reason at the bottom of a bottle. Some see it after talk. Flynn sees it with a fist to the face.” He was gone in a flash.
“You can't let him!” Pia appealed to Yancy and Borage.
Yancy picked her up and carried her inside, locking the door behind him. “This is the only way.”
Randi stood by the couch. “Jeff won't hurt him—much,” she faltered. She knew the strength her husband possessed, and she knew Flynn's stubbornness. It might take a lot to get through to him. “He knows what he's doing.”
“He's going to beat up Flynn! That's okay with you?” She shoved at Yancy, who didn't loosen his grip. “I have to go.”
Yancy held her, despite the fact she was fighting him. “No.”
“Yancy!”
“You want to see his humiliation?”
“Stop this!”
“You saw him last night.... Do you still think I should?”


Bursting into tears, the fight went out of her. She hung limply from his arms. Yancy lifted her, carrying her to the chaise lounge nearby. Randi sat next to her, and the three of them shared their silent misery.
at December 06, 2016