I Love Dialogue from So Much It Hurts by Dellani 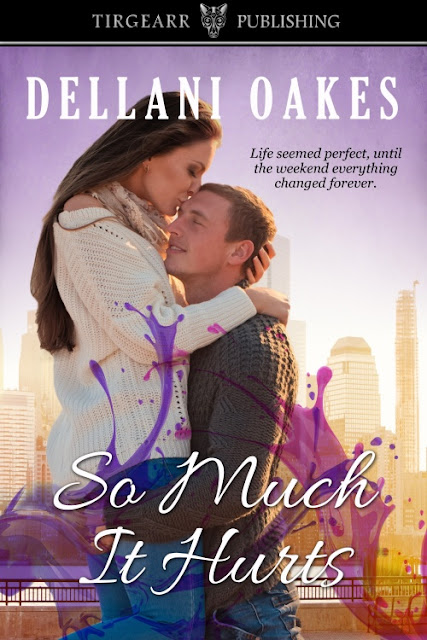 Pia has just met Flynn, who asks her to dinner. When he arrives at the door, he's brought along his roommate, Yancy. The two men escort her to the restaurant.

"Do you cook?" Yancy asked.
"I do. Why?"
"Because we get tired of eating out. If we pitch in on ingredients and assist in the kitchen, will you cook?"
"I'd love to."
"Sweet. You don't mind cooking for a crowd, do you?"
"No. Dad runs a restaurant back home. I've worked there since I was ten. I can make a vat of chili that will put hair on your chest."
"As long as it doesn't put hair on my ass," Flynn said, shoving the elevator open. "I don't like waxing."
Pia snorted. Yancy leaned over, speaking in a stage whisper. "Flynn hasn't reached puberty yet. His ass is hairless as a baby's butt."
Flynn reached around and rapped him on top of the head. "At least I don't have back hair."
"I don't have back hair."
"Seriously, you should see him at the full moon," Flynn remarked as they walked out the front door. "Werewolves howl and try to hump his leg."
Pia looped her arms through theirs, laughing loudly as they crossed the yard. "I'm going to love it here. You guys remind me of my brothers."
The men smirked, sharing a glance over her head.
"Thai Garden, here we come!" Flynn yelled, waving his cap in the air.
"Is it far?"
"You'll learn that everything you need is within walking distance. There's a grocery store two blocks that way," Flynn pointed south. "A variety of restaurants in every direction. A movie theatre that shows the classics. A bookstore, an art supply, a music store, pharmacy...."
"And a Dollar Tree three blocks west," Yancy added.
"We'll be happy to show you around. Do you know how to get to campus from here?"
"No. I don't have a car and I don't know the bus schedule. So much to learn."
"Lucky for you, my friend and I grew up in this city and if we don't know where to find it, it's not worth finding," Flynn bragged.
"You grew up together?"
"Met during our undergrads," Yancy explained. "We were roommates then, too. Seemed a good system, so when we transferred here and started our PhDs, it seemed like a good system."
"Yeah, I don't want to break in a new one. He's a putz, but I'm used to him."
"My roommate got married and moved out. I've mostly lived on my own. Except...never mind."
"Except for Bill," Flynn said.
"Jerald," Yancy added.
"Huh?"
"Dwight."
"Clark."
"Steven," she finished her sentence.
"The love of your life who absconded with your virginity, wooed you, then broke your heart, and left you" Flynn stated with certainty.
"Yeah. Something like that. Only I left him. But the rest is right."
"What did the bastard do?"
"Married my roommate."
"Dumb ass," Yancy commented.
"I was gonna say douche bag," Flynn contributed.
"Yes, to both. How did you guess?"
"We've both been in the receiving end of that, too," Flynn said quietly. "Marsha and Jan. Not Brady." He smirked down at her. "Yes, they were sisters."
"Well, they were a couple of dumb ass douche bags to dump you," she concluded.
They arrived at the restaurant and Flynn opened the door. Yancy held out her chair, helping her sit. Both men were very attentive, charming and friendly. Dinner was full of laughs. The men joked and poked fun at one another. They asked her lots of questions about herself, but were just as forthcoming with their own details. By the time dinner was over, Pia felt as if she'd known them for years.
"I can't remember the last time I had this much fun," she said as they were walking home. "I'm so glad I met you guys. It makes it easier being away from home. The big city is sort of intimidating."
Yancy put his arm around her waist, Flynn around her shoulders. Pia's arms went around their waists and she gave them each a hug.
"Thank you for such a great time tonight. I can't tell you how scared I was on the bus, getting lost...."
"We'll equip you with a GPS," Flynn suggested.
Pia snorted.
Once they were upstairs again, they walked her to her room.
"I'd invite you in for coffee, but I don't have a pot."
"We've got one, you want?" Yancy offered. "Flynn's mom got us a Keurig for Christmas and my sisters keep us provided with the cups. They know we're completely helpless with domestic pursuits."
"Don't make us sound completely lame. We keep ourselves fed, our laundry is clean, the room is neat and doesn't smell like old socks. I think we're doing okay."
"But we can't keep up with coffee," Yancy said. "It's completely beyond our capacity."
"I'd love some. Thank you."
© 2017 Dellani Oakes