I Love Dialogue from A Tisket A Tasket by Dellani 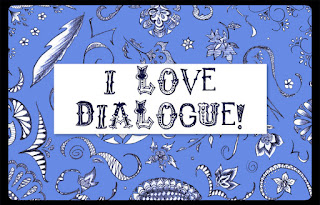 A Tisket A Tasket is the fourth book in my Miracle, Mississippi fantasy series. The members of the Circles have been in Louisiana, helping the son of one of their members. As their meeting is ending, their host gets a call from his daughter, who is visiting another group in Texas.

“I'll give 'em a call in a second,” Emmett said, pulling on his jeans. He had just turned his phone back on when it rang. “Speaking of Summer. Hep, baby girl?” He put the phone on speaker.
“Daddy, Caleb's dad told me to call and tell you they're all packing up and coming down.”
“We meeting up here at home, or in Miracle?”
“I'll ask.” There was a brief, muffled conversation.
“He said it doesn't matter, just give him a destination.”
“It needs to be up home,” Neil stated. “Couldn't tell ya why, I just know.”
“We're going to Miracle,” Emmett confirmed with Summer.
“Okay. It will be about ten hours. Got to round everyone up and get on the road. He wants to know if there are enough places to sleep, or do they need to plan to camp?”
“Dad's fish camp is empty,” Neil said. “There are cabins, pretty comfy this time of year. They'd need a little airing, but we were just in last week to clean.”
“Sounds good,” Summer said. “This is a hardy bunch, they don't mind roughing it. I'm fitting right in.” She loved to camp and commune with nature. She had an affinity for air and water, so she was happiest outside. “Daddy, can I stay with Caleb?”
“Sure, honey. But not in the same cabin.”
“Uck! Daddy!” she hung up.
Emmett chuckled. “That won't last long, but let me enjoy the moment while I can.”
“We'd better get home,” Neil said to Chase. “We'll need to give the place a shakedown. It's pretty good, but I need your help with the bug wards.”
“No problem. Marissa's really good with those.”
“Then I need her too.”
Sudden motion possessed them all. The people in Louisiana needed to pack up. The people from Mississippi needed to get things ready back home. Already Jackie and Jordan were organizing with the other women, discussing numbers, food and who would sleep where.
Brian watched, amazed. “Seems kinda sexist, them organizing it all,” he said to his dad.
Miles glanced over his shoulder, shrugging. “Your mother would object if we tried to help them. Watch. Babe, we can help out, so you ladies aren't doing it all.”
“Not on your life,” she snapped back. “If I wanna get kicked stupid, I'll let you know.”
Brian burst out laughing. “I never heard her say that before.”
“Inside joke. Suffice to say, they don't want, or need, our help.”
“I guess I'll stand around and look smarter than I am.”
“Yeah, good luck with that. Grab the baby.” He picked up diaper bag and camp chairs, heading to the car.
Brian picked up Elise, tossing her in the air. This time, he was sure she hovered a moment. Even he, as powerful as he was, couldn't do that. “No one ever told her it wasn't possible,” he murmured as he put her in her seat. “You keep defying the laws of gravity, baby girl. You can teach your dumb ass brother a few things.”
Elise touched his cheek, grinning. “Dumdum.”
“Oh, thanks!” He kissed her hand and helped his mother into the car.
Jordan had decided to ride up with them since Louisa and Ginnifer wanted to come up early and were riding with her parents.
“I wish there were some kind of magic spell to make putting in a car seat easier,” Heath grumbled. “Can't manipulate plastic.” Muttering, he finally let Andre take over.
Once the seat was in place and baby Wilson ensconced in his throne, Andre took Louisa in his arms.
“You be safe and call me when you get there. I'm right behind you.”
“We'll be fine. I love you.” She gave him a little kiss.
“So much, it hurts,” he whispered, deepening the kiss. “Bye, Stinky,” he said to his son.
The baby blew bubbles at him, gurgling happily.
“Stop that, he's gonna think it's his name.”
“And yet we named him after a volleyball.”
Louisa swatted him and he backed up from the car, laughing.
© 2018 Dellani Oakes
To Buy Dellani's Books
For More About Dellani