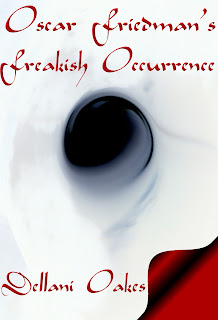 I wrote Oscar Friedman's Freakish Occurrance in 2009, after a couple of horrible trips with my GPS. After ending up in a part of Orlando that no woman should be in alone, I decided the GPS was possessed. Besides, she had a really snarky way of saying “Calculating route,” in a very harsh tone. When I finally got back from that trip, I sat down and wrote this story.

Oscar Friedman sat in the hot, humid, stuffy car gazing at the dashboard with chagrin. The rented Prius had the most complicated layout of any automobile he'd ever seen. When he'd told the agent that he wanted a gas efficient model, he hadn't envisioned a hybrid. The agent, even now, was trying to give him a lesson on how to start the car. Unfortunately, it made very little sense. He tried it himself and, with lots of intervention, felt relatively competent.
"Ever used a GPS?" The young man, who looked about twelve, asked him.
Oscar felt each of his forty-seven years as he gazed into the vacuous blue eyes. "No."
With a patient smile, the young man explained its use. He typed in the address of the hotel where Oscar was registered. "It will give you directions there and tell you when you've arrived," he said with a happy grin.
"It talks to me?"
"Yes. And it has a map so you can see exactly where you're going and where you are. If you make a wrong turn, it helps you get back on track."
"Great, a machine that's smarter than I am."
"Not exactly. It's part of a satellite tracking system...."
"I know what it is," Oscar said slowly. "Just because I've never used one—and I'm twice your age, doesn't mean I don't know what GPS stands for."
"Gotcha. You're technologically illiterate, Pops, that's all."
Oscar took great offense to that statement. "Not illiterate, inexperienced. In my day, you got a map or asked directions. It wasn't perfect, but it worked."
"Yeah, well this works better." Pursing his lips, the young man frowned at Oscar. "Have a great trip." He didn't sound like he meant it at all.
"Thanks, you've been a peach." Neither did Oscar.
Shutting the door, Oscar began the complicated process of starting the car. Determined to do it without further assistance, he fumbled around, hitting upon the correct sequence entirely by accident. Putting the car in gear, he pulled out of the parking lot, following the directions of the GPS.
At first the navigation was easy. As he progressed, he found the directions more difficult, the turns more frequent. When he finally got to his hotel, which the agent had assured him was only five minutes away—fifty-five minutes later—he was furious. The hotel loomed on the horizon, but the GPS didn't tell him that he'd arrived. He drove past it, cursing loudly.
"It's right there!" he yelled, pointing at the hotel.
A block later, the GPS made the announcement, "You have arrived."
"I haven't! I have to get back to the hotel, you stupid, electrical fiend!"
Trying to turn right and make a block, he saw the street was one way going the opposite direction.
"Dammit!"
In desperation, he stopped at a corner gas station and asked directions. The clerk spoke very little English, but a helpful patron got him back on the right road. Arriving far later than he'd hoped, he walked into the lobby sweating and angry after his trip.
The clerk wrinkled her nose as he checked in, giving him a baleful eye as he picked up his bags and headed to his room. The cold, darkened room felt wonderful as he stripped off his sweaty clothing. Dropping it on the floor, he wandered into the bathroom for a long, hot shower. The phone was ringing when he got out of the shower. Grabbing it up angrily, he answered.
"Yes?"
"Mr. Friedman, front desk. So sorry to bother you, sir. Your car alarm is going off and has been for several minutes. The manager asks if you'd please come down and shut it off."
"Car alarm? I didn't even know it had one. I don't remember setting it. Right now I'm wet and naked. I just got out of the shower. I'll be right down."
"Thank you, Mr. Friedman. I'm so sorry to bother you."
"Sorry to be a nuisance. Damn car is making my life hell."
He dried off and dressed rapidly. Grabbing his car keys and the room card, he ran to the elevator and headed to the parking lot. His car alarm was indeed going off loudly and persistently. A crowd had gathered around it. Some of the men were talking about lifting it in order to shut the alarm off.
"I saw it in Twins," one man said loudly. "You lift it at a specific angle, it shuts off. Arnold lifted the car."
"What angle? I'll hurt my back I lift it too far," his companion complained.
The men stood there scratching their heads as more people gathered.
"What idiot doesn't know his car alarm is doing off?" An older lady complained. "What a moron!"
"Surely the hotel called him," her equally elderly companion added.
"Excuse me, ladies." Oscar squeezed between them. "Sorry." He clicked the button and the alarm shut off. "I didn't even set the dumb thing. I don't know how that happened. Damn rentals."
© 2018 Dellani Oakes
To Buy Dellani's Books