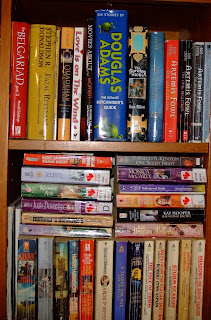 Regardless of the genre, there comes a time when characters have to talk. For some authors this is a challenge. How do you make the characters sound different? Where do you put the actions? Does it sound real? What would this character say? How would the other respond?
Dialog is important to a story. Making it sound realistic isn’t easy. One thing I do that helps me is trying to think like the characters. There is an easy exercise for this which I’ll go into at the end of this article.
Next, keep it simple. Don’t try to go all Shakespeare and make flowery speeches or say something relevant – unless that’s what the character is trying to do. Here again, character centered.
Make sure the dialog advances the story. Don’t just throw in some witty repartee for the sake of having them say something cute or funny. That’s for cheesy action flicks. If the characters would use this time for that, fine. Otherwise, leave it out.
Keep the passages short. Again, we aren’t doing Shakespearean soliloquies. There are other ways to express a character’s thoughts. Use his actions or her facial expressions to express what they are thinking. A well placed raised eyebrow can be quite eloquent.
Many writers have trouble with simultaneous action and dialog. Juggling this can get tricky. Rule of thumb, at least as far as I’m concerned, is keep relevant segments together. Don’t split the sentence unless it’s absolutely unavoidable. Put actions before or after the dialog, but keep these passages short. Longer, more detailed action needs to be in its own paragraph. When the characters are talking, that’s the focus. They wouldn’t be talking if they didn’t have something important to say. Let the dialog stand out on the page, dominating it.
Having a few simple guidelines can take the sting out of dialog. To help get into the character’s head, try asking yourself the following questions:

Finally, read the dialog aloud. If it flows with the descriptions, you’ve done it well. If it doesn’t, look at it again and see what can be changed.
The above are my opinions and techniques for writing good dialog. Do you have any tips for others? Do you have trouble with dialog and would like other techniques? I am always interested in learning new ways to conquer a problem. Please post your tips and problems below.

For more of Dellani's books, check out Indian Summer, Lone Wolf and The Ninja Tattoo on Amazon, Barnes & Noble and Smashwords.

oh so very true. I have read some "works" where all the characters sounded alike and I couldn't tell who was who. When I asked the author why did everyone sound the same; her only response was that "it's only dialogue." This is another lesson that it's not just dialogue; but something to advance the story and help reveal character.