Excerpt from My 2008 NaNoWriMo Novel - Deserted 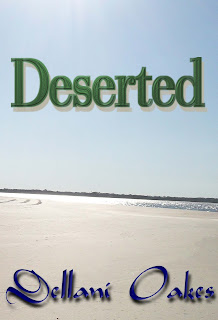 "Ms. Kendrake, they're expecting you upstairs on the fifth floor, room fifty forty-two. There will be someone at the desk up there who can direct you to the correct room. You'll need a name tag. One second."
She printed out a name tag, handing it to Alyssa with a smile. Alyssa smiled in return, taking the name tag, attaching it to the lapel of her pale pink pantsuit. The desk on the fifth floor was unoccupied, so Alyssa waited until a tall swarthy skinned man walked by.
"Excuse me," she said quietly.
He turned to her with a smile. "May I help you?"
"Yes, I'm looking for the casting director of Deserted. I was told to go to room fifty forty-two, but I don't know where that is."
"I'd be happy to show you, Miss Kendrake. I'm going there myself. My name is Barry." He shook her hand politely.
"Thank you, Barry."
She followed him down the hall, admiring the view. She didn't usually allow herself to stare at a man, but he didn't seem to notice. He was incredibly well built and his clothing set off his physique well. He wore dark gray dress pants, a dove gray shirt and no suit coat. His tie was a blend of gray and blue, like damp watercolors swirled together. He looked more like a professional athlete than someone who worked in an office.
Barry chuckled to himself. It wasn't often a pretty woman came in the office and watched his ass as he walked down the hall. Strutting casually, he emphasized his swagger a little, to keep her looking. She thought he wasn't aware of her gaze, but he was. He didn't mind the lingering caress of her eyes. As a matter of fact, it was not only flattering, but a distinct thrill.
Alyssa watched the muscular man walk, thinking how long it had been since she'd had one of her own to admire up close. Blinking rapidly, she nearly ran into him when he stopped in front of room 5042. He held the door partially open, standing not quite far enough away for her to walk easily through. He leaned casually against it, one arm raised well above her head. Smiling down at her, he invited her into the room with a smile and a hand at the small of her back.
Alyssa had to turn slightly to face him, nearly brushing up against him. With a shy smile, she eased by his arm. Eyes demurely downcast, she glanced up at him like Lauren Bacall. Barry felt his pulse quicken as he closed the door behind them.
"Everyone, this is Alyssa Kendrake. She's here about Deserted. She's our next appointment."
"Welcome, Alyssa," a smiling, dark haired woman greeted her. "Please have a seat. I'm Kimberly Crimson, casting director. You've met Barry Sebring. Next to me is Mickey Stafford and to the left of him is Grace Bing. Why don't you begin by telling us a little about yourself."
Alyssa took the indicated chair. It was softer than it looked and she sank more deeply than she anticipated, nearly losing her balance. Righting herself with difficulty, she sat on the edge so she wouldn't have another mishap.
She looked quickly at the people in the room, sizing them up as best she could. Barry was tall, athletic, handsome. Kimberly wasn't much over five feet, slightly rounded, with soft dark hair and eyes. Grace was somewhat older than the others. Graying hair was pulled back in a sleek ponytail. Her half moon glasses rested on her nose. Mickey, who couldn't have been much older than her high school students, was probably an intern.
"I'm Alyssa Kendrake. I'm thirty-two and a school teacher, or at least I was until all the budget cuts. To be specific, I am an out of work, high school, English teacher. I'm not really sure why I'm here. I'm not an actress."
"You filled out an application for a clerical position," Kimberly answered. "There was a picture with your application. I was going through the files and liked your look. It was my decision to ask you in."
"Oh, well that's great! I'm desperate to find something. The wolf is scratching at the door as we speak."
They smiled politely, shuffling papers in front of them. Barry stared openly, the others kept glancing at her, scribbling notes on their papers. No one said anything for quite awhile.
"What else can you tell us about yourself?" Barry asked suddenly. "Are you married? Seeing anyone?"
Alyssa got the impression that those were more than casual questions. She couldn't see what they had to do with anything, but turned to Barry with a friendly smile.
"I'm single, not for lack of trying. Why? Is this job contingent upon my being single?"
"No, I was just curious. Purely from a business point of view, of course," he added quickly, glancing at Kimberly.
© 2016 Dellani Oakes

ToFind Out More About Dellani's Work