Excerpt from My NaNoWriMo Novel 2012 - He Thought He Saw 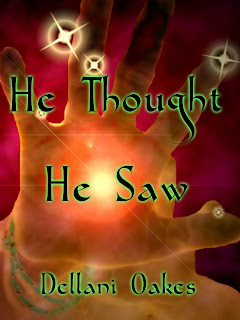 Wind whispered in the trees and dried leaves clattered in its wake. An owl hooted. The hairs on the back of his neck stood at attention. The full moon seemed to follow him as he walked down the road alone. The wind became voices. The leaves, the dry rattle of old bones. The sighing grew louder and Brian was able to pick out words. At least, he thought they were words, but in a language he couldn't understand.
Increasing his pace, he glanced over his shoulder. Wispy figures gathered in the tree line around the swamp road, moving slowly and steadily toward him. Brian tried to convince himself it was only his imagination, but it felt far too real.
One of the figures approached at a slow, loping run. Brian could hear the heavy, measured footfalls as it lumbered toward him. He completely lost his cool. Roaring loudly, he ran at the figure, dodging away when it grabbed at him. Chilling wind passed as the figure drifted away, dissipating as it headed to the woods on the other side of the road.
Brian ran along the center of the road, frightened by his encounter with the wraith. More of them gathered in the swampy woodland, but no others were bold enough to approach him. Hearing a twig snap to his left, Brian put on a burst of speed. With a cry of fear, he felt a shove at his back and tripped over his own feet. As he fell, he saw the wraiths grow bolder. They moved in unison, swooping toward him. Terrified, Brian lay on his belly, unsure how to combat them.
A solid form burst out of the bushes. A large dog stood over Brian, growling and barking. It took a moment for him to realize that the wraiths halted. Some tried to go a step or two further, but the dog renewed its attack. One by one the ghosts dispersed, melting into the fog once more.
Brian let his breath out slowly. The animal stood over him, but moved aside as he sat up. It was the biggest dog Brian had ever seen, broad through the chest with powerful legs and a ridge of hair down his spine. It looked silver in the moonlight.
Curious, Brian reached slowly toward it, hand out, palm up. The beast's tongue flicked out, licking his cheek. Her warm breath convinced the boy that the dog was alive and real. She slurped him again, butting his hand so he'd pet her. Laughing, he complied.
"Where did you come from, girl?" Predictably, he got no reply. "Never mind, I'm just glad you're here."
He got up, dusting himself off. Leaves stuck to his body, mud caked every inch of him. Twigs and more leaves adorned his closely cropped hair. Getting his bearings, he headed toward home once more. The dog walked with him, her head under his hand. Her tongue lolled and she looked as if she were laughing at his appearance.
"You take a header into a mud puddle and see how good you look."
The dog barked gleefully. She dashed ahead, sniffed and snorted, before trotting back to his side. She stayed with him until they reached his home. With a yip, she left him, drifting into the woods. The front door fell shut with a comforting bump behind him. Heaving a sigh of relief, Brian locked and bolted the door. He leaned against it, panting. His hands shook and he felt light headed. His heart thumped so hard in his chest, he could hear it in his ears.
He slowly made his way upstairs, wishing his mother were home. Being home alone had never bothered him before, but he felt vulnerable, isolated. Brian hadn't realized quite how dirty he was until he saw himself in the bathroom mirror. He stripped off his filthy clothing and dropped it on the bottom of the shower. He hoped he could get some of the trash off it before putting it in the laundry.
The water ran black as he washed himself and his clothing. He picked up twigs and leaves as he bathed. Afterward, he scooped up handfuls of debris, dropping it in the garbage. His clothing, he placed in the sink to drain as he dressed. As he lugged the basket of wet clothing downstairs to the basement, he saw what a mess he'd left when he'd come in. The white curtain over the front window was caked with dirt. A muddy trail led up his mother's clean, wooden steps.
He descended to the basement quickly and tried not to think about his experience in the woods. It still scared him, even though he was safe in his home. He'd never particularly liked the basement and his recent scare made it worse. He threw his clothing into the washer, added soap and took the stairs to the kitchen two at a time.
Cleaning up his mess kept his mind off what had happened. Strange things had been happening to him for weeks, getting weirder and spookier by the minute. At first, he'd passed it off as stress. It was apparent that his stress level had very little to do with the events of the night He'd been coming home from a friend's house after a Halloween party.
Chase lived on the other side of the tiny, Mississippi town. The quickest way home was to cut through the woods that skirted the swamp. Brian had taken that route on foot or on his bike a million times with no problem. So why was tonight different? Because, tonight something had changed. He couldn't put a finger on it, would never have been able to explain it in words, but he knew it as surely as he knew his own name.
© 2016 Dellani Oakes