I Love Dialogue from Under the Western Sky by Dellani 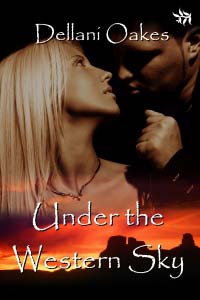 "Oh, Bobby," Grace Marshall said suddenly. "I saw something at J.C. Penny's you might like to see."
"Oh? What's that?"
"In the music section. There's a new album out by Carlos Santana. It's called Amigos."
"Really?"
"Yeah, it's on promotional sale. I can get a discount on it for you too."
One of Grace's part time jobs was stocking the records at J.C. Penny's department store. She always kept her eye out for things the kids would like.
"How much? Ramon is supposed to pay me tomorrow."
"It will be a little over five dollars once I get my discount."
"Cool! I can get you the cash tomorrow."
"How about I buy it, and you pay me back?" She produced a bag from under the table.
"You didn't! For real? Thanks, Grace!" He kissed her cheek, giving her a hug. "This is too cool! I love this guy."
"We know that, silly," Maria said with a laugh. "You tell us often enough."
"You wait," he said with confidence. "Some of these other groups will be long gone, but Santana, he's going to last."
"You just like him cause he's Mexican," Rico said in a superior tone.
"I like him because he's the most talented guitarist around," Bobby countered.
"Jimmy Page is better."
"No, but he's as good." He ruffled Rico's hair. "One day you'll look back on this conversation and say, 'You know, my crazy cousin Bobby said Santana was here to stay.'"
"No, I'll look back on this day and think, 'My cousin Bobby is crazy'. That's all I'll think."
"We should take it to Toni's and listen to it later. She's got the best stereo system," Libby suggested.
"Good idea."
Grace and Consuela Menendez exchanged a curious look.
"Is there something going on here we don't know about?"
"Like what?" Bobby tried to look innocent, but the smile kept breaking through.
"You two aren't dating, are you?" Grace asked, looking at them both. "Are you? Oh, Connie!" She clapped happily, jumping up and down like a teenager. "I'm so happy!"
"Yeah, Mom. Is it such a big deal?" Libby was puzzled by her mom's behavior.
"But it's marvelous! We were hoping, weren't we, Connie? We saw it a long time ago, but we wondered when you would realize it yourselves."
"It's wonderful, Grace. So, when is the wedding? I want lots of grandchildren."
"Whoa," Bobby held up his hands like a traffic cop. "Who said wedding? We're dating and I'm taking her to prom. This doesn't mean we're choosing China patterns and stupid shit like that."
"Roberto," his mother chided.
"Sorry, Mom. 'Stuff' like that. I just asked her to go steady."
"Are you two being careful?" Grace gave them a penetrating look, then her eyes lingered on Bobby making him want to shrink into the ground.
"Mother! Oh, my God!" Libby turned six shades of red.
"It's not like that, I swear!" Bobby looked flustered. "I just asked her to go steady. Why do you assume? Can I die now?" He asked Libby, taking her hand to comfort her. "Is it okay if we both just like melt away? When did we become the center of attention?"
"About five seconds ago," Maria chided him. "So that's why Sister cornered you? She has a sixth sense for when kids are being bad. I swear she can smell it."
"We're not being that kind of bad. We kissed, that's it!" Bobby wanted it clear he was behaving himself.
"Not entirely true. You were playing a game of tonsil hockey on the porch last night."
"Mia, I don't tell your secrets."
"You don't know my secrets."
"Steve Gutierrez after the football game, under the bleachers."
"You wouldn't dare!"
"Steve Gutierrez? Oh, he's cute," Libby added. "Isn't he dating Bonnie What's-Her-Name?"
"No, he's with Suzie Thingummy," Bobby countered.
"Oh, her." Libby made a nasty face. "Slut." She coughed.
Bobby patted her on the back and the two of them left quickly while the attention was on Maria instead. As they were leaving, they heard Grace say, "So, what's this about Steve Gutierrez?"
"What about Steve Gutierrez?" Libby asked him as they walked to Toni's.
"You remember what we were doing on the porch last night?"
She remembered, blushing vermilion. "Yeah. So?"
"So, that, only under the shirt."
"Ooh. Um.... Not my business."
"And what we were doing wasn't Maria's either."
"Maybe not, but we should be more careful. If she could see, what about Bitch Lady?"
"So, next time, invite me in." He laughed, putting his arm around her waist as he gave her a playful kiss.
© 2016 Dellani Oakes
To Buy Under the Western Sky