An Excerpt from Indian Summer by Dellani Oakes 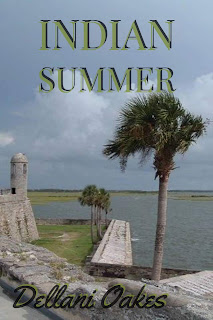 This story holds a special place in my heart, because it is not only the first novel I finished, it's the first I ever published. It took me nearly 10 years to complete it, and required a lot of rewrites, but I made it! It's a lovely sweeping historical novel with an interesting location, which few authors have explored.
It's the spring of 1739 in sultry St. Augustine, Florida and something's amiss. It seems a British spy has wormed his way into their lives and he's bent upon leading the British Army in an attack against the fort and town. It's up to Gabriella Deza and her fiancé, Manuel Enriques, to stop the spy from being successful.

The rain was so heavy, I soon lost track of him in the storm. I knew he'd be heading to the wharf, so I found my way there as best I could. Once I reached the shore I began to call him. My voice was drowned by the sound of the wind.
"Please," I begged of the men that I knew. "Will you help me find my brother?"
But all were too busy to listen to a young lady who was too foolish to stay out of the storm. I could see Papa's ship in the ocean heading toward the wharf, as the waves pounded it on all sides. It looked ready to break apart! I began to pray as I ran looking for my little brother.
"Oh Lord, protect them and help me find my brother!" I repeated over and over as I ran through the crowd, pushing my way in the press of men.
It was then I saw Marcos. He was trying to help deploy ropes. The men on the shore tied off stout hemp lines to the pier and were roping themselves in to wade out into the storm. They formed a life line should the ship break apart. Other men were standing and holding the ropes to bring in the others if they foundered in the waves. No one was watching my brother. They were all too busy with their appointed tasks.
I saw the approaching wave before he did, for he was not looking at the sea. He had turned briefly to implore the men once more to let him help, but none gave him their ear.
"Marcos!" I called, though he couldn't possibly hear me. "Marcos, behind you!"
The wave moved faster than I could, with all my damp skirts around my legs. I knew I couldn't reach him and he was going to die. Despite his faults, I realized I dearly loved my little brother. I didn't want to lose him. I couldn't even think what his death would do to Papa.
As I ran, I watched the wave build higher. It rose until I could hardly see the top. The ship rode the crest. The men on shore saw the swell approaching. They dropped the ropes, running inland as fast as they could in the wet sand. Several fell and were swept away by the waters. The ropes held them and they were able to pull
themselves out of the waves.
Marcos was calling to them. "Where are you going? My mamá is on that ship!"
He hadn't turned around, distracted by their flight. The ship loomed nearer and the wave grew. I couldn't reach him through the wet sand and the press of men running against me.
"God, I beg you please save him! I swear I'll be good to him all my days! Oh, Mother of God, protect him! I promised Papa!"
Lightning flashed across the sky illuminating the beach, lighting Marco's face like a ghost! It was then he turned and saw the ship as the wave approached him. He froze.
"Marcos!" I screamed, "Marcos run!"
He heard my voice, but he was paralyzed with fear. I ran, screaming for him to move. There was no way he could escape. The water was too deep, its pull stronger than he. The darkness and rain enveloped him, obscuring my view. In the next flash of lightning, I saw the ship looming ever closer and screamed for all I was worth!
Suddenly, another figure appeared on the beach. A man, large and strong, was running toward my brother, a rope around his waist. He came upon Marcos just as the wave broke on the shore, grabbing him securely. He dropped to the ground, tucking the little head against his massive chest, holding my brother with an inhuman strength. He turned his body, taking the brunt of the wave on his back and powerful shoulders. Marcos grasped his waist just before the wave's surge covered them.
The ship swerved hard to starboard, hitting the corner of the pier not far away, shuddering to a halt. The water rushed around the ship, up the beach, over my brother and the man. I couldn't see what happened next, for I had to retreat out of the wave's reach. The greedy fingers of water clutched my dress, determined to drag me into the fray. Were it not for the aid of the men on shore, who held me fast, I would have been spirited away and surely drowned.
I babbled every prayer I knew, calling on God to help them. Little by little the waves receded and I could move closer, looking for them. I saw the rope tied to the pier, taut with weight, and began to pull. Men from the shore saw me and raced to my side. Together we hauled them in. I feared both were surely drowned. Finally, their sodden forms broke the surface of the waves. I rushed forward, but the men held me back, for the currents were wild and treacherous.
© 2017 Dellani Oakes
To Buy Dellani's Books
For More About Dellani