Undiscovered - An Excerpt by Dellani Oakes 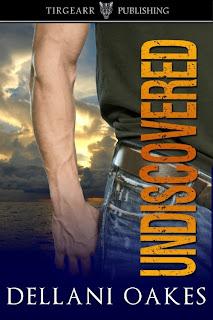 This month, I'm trying something a little different. I've shared a variety of things here, but I've decided to revisit some of my favorite excerpts from my books. Starting today, I will be posting snippets from my published works – and probably some of my unpublished as well. To kick it off, Undiscovered. Set in Daytona Beach, this story is near and dear to my heart.

Someone wants Kent Griswald dead. Could it be his browbeaten younger brother? His haughty personal assistant or the disgruntled director of his next movie? Whoever it is, misses the first time, shooting someone else instead. It's up to Detective Walter Scott to uncover the truth before it's too late.


"How much did you say the payments are a month?"
Same question seven times.
"That depends on how much you put down, Mr. Anderson. Bob in Fiance will be happy to discuss that with you." Pay attention. The answer won't change.
"So, whatcha think, baby?" he asked his bride.
Susan Anderson wriggled with glee. Everything under her skin tight, skimpy dress shimmied. "Oh, honey, it's perfect! It's so wonderful! I love it! Can we get it?"
"Whatever my baby wants, my baby can have. Where do I sign?"
"Also a matter for Bob in Finance," Cadence Stuart replied. "Do you want to see the upstairs before you make your final decision?"
"Oh, of course!" Susan Anderson bounced gleefully, clapping her hands.
Cadence felt like she was at a pep rally. She wasn't surprised to find out that Susan was head cheerleader in college and that Ted, her hubby, was quarterback. They were newlyweds, on their honeymoon in Florida and looking to buy a condo.
"The stairs are this way," Cadence said with a sick smile. "I think you'll find it very spacious."
"How many bedrooms?"
"This is a three bedroom, Mr. Anderson. There are some two bedrooms and even a four bedroom available."
"Oh, we hardly need four."
"But we need three," Susan said, grasping his arm as they climbed the stairs. "So Teddy has his office and we can have a nursery when we have a baby."
"You're not already expecting, are you?" Cadence couldn't keep the disgusted curiosity from her voice.
"No," Susan giggled. "But we want a baby right away. Don't we snookums?"
"Anything my doll baby wants, she gets."
And you get unlimited access until she's preggers. Smart man, knows when he has it good.
Cadence led them upstairs. Susan oohed and ahhed over the bedrooms. She loved the drapes, the carpet was to die for, everything was darling, clever or precious. Cadence was just about ready to lose her lunch when they said the magic words. "We'll take it."
Concealing a smile of satisfaction, Cadence led them to the sales office on the same floor. She introduced them to the sales manager and he took them in his office.
"Thanks, Cadence. I've got it from here, sweetheart."
"No problem, Bob. I'm gonna go close up."
"Sit down. Take a weight off. You look tired."
"I'm exhausted. I was up late grading papers. But I couldn't let this sales possibility pass me by."
"True. Well, you go get some rest. Leave this to me."
"Thanks, Bob."
"Anything for you, honey." Bob was a nice man. Twice her age, he took a fatherly interest.
Cadence sank into a soft chair in his outer office as he shut the door on the sales room. Closing her eyes, she let the murmur of voices wash over her. The loud report of a heavy caliber rifle shocked the air. Another followed.
Cadence ran down the hall. That sounded like it came from the room she'd been showing. What the hell? Frozen with indecision, she stood in the hallway. Pounding footsteps sounded from down the corridor to her left.
Turning, she saw a man in a black ski mask and anonymous clothing barreling down the hall toward the elevator ahead of her. Although he was running away from her, she noticed he was tall, broad shouldered and moved like an athlete. He hit the stairway, running full tilt. It wouldn't take him long to clear four stories to the ground floor.
To Buy Dellani's Books
For More About Dellani