It Takes a Thief – An Excerpt by Dellani Oakes 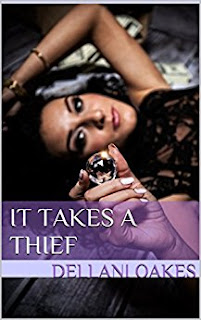 Next, I'd like to revisit another of my favorites. Okay, to be honest, I love all my books, just some more than others. I'm very fond of the main character in this one, Jason Banes.
Jason Banes is a thief, he readily admits that, but he's quick to deny that he's also a murderer. Accused of multiple homicides, and theft, he agrees to help a multi-national task force find the real killer. When he's assigned to an FBI team for protection, he meets Agent Taylor Driscole. It's a race to find Orchid before she kills again. Though she's reluctant to use Jason's skills, Agent Driscole realizes that sometimes, It Takes a Thief to catch a murderer.

"You've got good instincts on the mat, kid," Tim Stuart complimented.
As the most experienced martial artist on the team, he'd taken on the role of Sensei. He was a good, patient instructor. Jason had learned a lot in the last half hour, not the least of which was how hard Taylor Driscole could kick. He was still limping.
"Falling down is the most important point," Tim continued. "Learn to fall, you can always get back up. Fall wrong, it's all over."
They practiced knocking one another down for awhile. Greg was paired with Alex Graves, leaving Jason with Taylor. It was ideal for size, but not for desire. Every time they grappled one another, Jason's body reacted automatically. It was getting more difficult to control the manly urges.
"This time, come at her from behind," Tim told Jason. "Grab her around the neck and pretend you have a knife. You right or left handed?"
"Ambidextrous."
"Advantageous. Pick a hand. Taylor, be gentle."
Jason didn't like the look on her face as she turned her back on him and closed her eyes. He took a deep breath before running up to grab her. He held his left hand in a fist as if he held a knife. Grabbing her to him from behind, he accidentally got a handful of very tasty breast. She smelled fantastic and her hair tickled his nose as he held her close.
Taylor stiffened. She could feel Jason's muscular body pressed close, his firm manhood just above the crest of her hips. Forcing herself to react to an attacker, she elbowed his gut and twisted the imaginary knife out of his hand. She hit him harder than she'd intended. Jason collapsed on the mat, gasping for air, eyes watering as he struggled for breath. His dry lips sipped oxygen raggedly.
"You trying to kill him, Tay-tay?" Greg asked as he gave Jason a hand up.
Jason stood slowly, doubled over, hands on his knees, as his lungs tried to find enough room to expand in his sore rib cage.
"Do you want to see Spence?" Alex asked solicitously.
Jason shook his head. Tim supported him, helping him walk to a nearby bench.
"I said disarm him, Driscole. Not kill him."
Taylor said nothing. She'd overreacted and she knew it. The desire she felt warred with her training, causing major conflict. She tossed a clean towel at Jason, spun on her heel and headed to the dressing room in tears. Greg quickly followed her.
"Something me and the boys need to know about?" Tim asked gravely.
Jason shook his head. Alex handed him a bottle of water.
"Something's not going on?" Tim pressed.
"We've got some personal—challenges—if you will." He was embarrassed to admit his attraction. "I don't want to get the lady in trouble, lads."
"We're close," Alex said. "Tay's like a sister. We'd never rat her out. But you're feeling something even more personal. Am I right?"
"Oh, yeah," Jason replied. "I'd love to say it's just because of my incarceration, but it's not."
"You need a woman, friend." Alex clapped him on the shoulder.
"Yeah, but not just any woman. That's the problem. Until today, anyone with the right anatomy would have been great."
"But not now," Tim supplied.
Jason said nothing, just sipped his water.
"I wish I had some advice for you, kid. You can't hardly tap that. It's more than our jobs are all worth," Alex said, staring at the door Taylor had walked through.
"Your jobs—my life," Jason replied.
© 2016 Dellani Oakes
To Buy Dellani's Books
For More About Dellani