An Excerpt from Savage Heart by Dellani Oakes 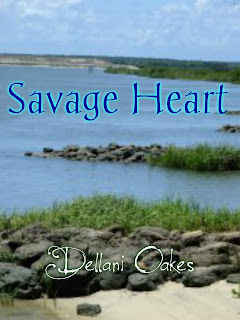 Though it didn't take me quite as long to finish Savage Heart as it did Indian Summer, it still was delayed somewhat by research. Thanks to the fine re-enactors in St. Augustine, Florida, and Savannah, Georgia, I was able to pinpoint my all important date, and finally finished the sequel to Indian Summer.
It's the summer of 1740 and rumors of war haunt the small community of St. Augustine, Florida. Already, Oglethorpe's troops are on the move. Scouting parties of Creek Indians have moved south, skirting the town, attacking outlying farms. Meli Chasseur's home came under attack and she is the only one to escape. Injured and afraid, she stumbles into Sailfish's camp. Could this be his next chance at true love?

His second night out, Sailfish sat up suddenly, woken from a deep sleep. What sound had he heard that startled him? Surely there were few creatures who would approach him with a fire beside him? Lying down, he pretended to fall back to sleep, forcing his breathing to become slow and even.
A twig breaking betrayed the intruder's position. Sliding his knife out of its sheath, he lay still, controlling his breathing. Whoever it was made little pretense of quiet. Stumbling near the fire, nearly falling in it, his visitor dropped to the ground.
Sailfish smelled fresh blood. The breathing was ragged, pain laden. Opening his eyes, he rose slowly to his knees. It was apparent whoever it was wouldn't put up a fight, but that didn't mean that it was safe. Scanning the horizon, he noticed it was near dawn. The faintest glimmer of light tinged the far east over the ocean.
The long grass to the west of him rustled, not from wind, for it was still. Crouching, he waited. The bushes parted and out limped a panther. It looked old, battle worn, injured. Blood flecked its flank, crusted and caked in the tawny fur in the folds of skin beneath its right foreleg.
Snarling and growling, it approached the body in a heap by the fire. Springing awkwardly, it tried to land on its prey, but Sailfish intercepted its lunge. Tackling it, he knocked it off balance, driving his knife into the creature's bared chest. Twice more he stabbed it, blood spurting from its wounds, nearly blinding him as he hit an artery.
It didn't put up much of a fight, for it was already weak from blood loss. Once it was dead, he dragged it away from his camp and washed himself in the river. Taking his tin pot, he filled it with water, carrying it back to the huddled form on the ground. He built up the fire and started the water heating. When it was boiling, he added herbs to the water and set it aside to steep.
The sun was rising in earnest now. Grateful for the light, he gently rolled the body on its back, feeling for a pulse. He couldn't find one in the wrist, so moved to the neck. It was faint, thready, but continuous. Breath came in short, shallow gasps. Blood oozed from half a dozen wounds.
Taking his knife, he cut the breeches away from the legs. Working steadily with rags from the clothing, he dabbed at the slashes. None were very deep, but there were many. The fellow was lucky the panther was old and hurt or he'd surely be dead.
As the sun rose higher in the sky, he saw the face more clearly. The features were neatly chiseled, the cheekbones high, the eyes wide set under a curved brow. The young man looked to be of mixed lineage, probably a mulatto, though there could have been some blood of the River People as well. Long lashes lay still against the pallid cheeks. Curly black hair was cropped just above the shoulders, falling loose around his face.
Sailfish finished cleaning the leg wounds, binding each one with cloths from his pack. His water was too bloody to continue, so he dumped it out on the ground. Washing the pan, he refilled it, heating another batch of herbs. While it steeped, he cut the shirt away from the torso, tugging it open.
With a cry of surprise, Sailfish fell backward. The person lying on the ground wasn't a young man at all. Puzzled, he gazed into the silent face. "Who are you and where do you come from?"
© 2017 Dellani Oakes
To Buy Dellani's Books
For More About Dellani