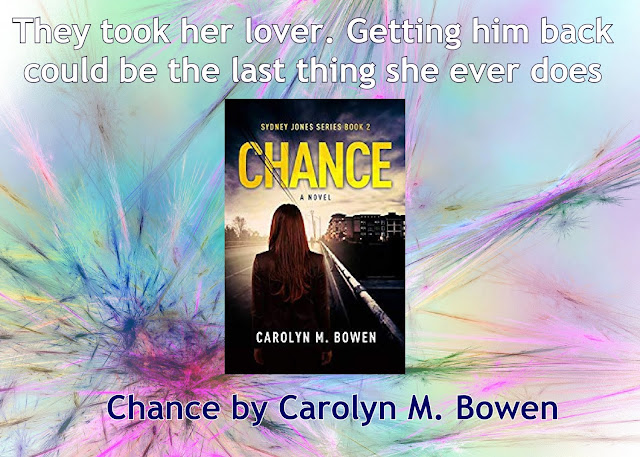 They took her lover. Getting him back could be the last thing she ever does…

High-powered Atlanta attorney Sydney Jones never backs down from a case. So when her bodyguard and boyfriend is accused of murder, she’s determined to fight for him in court. Instead, the charges are suddenly dismissed, and he vanishes without a trace…
Suspecting CIA involvement, Sydney takes on a lawsuit with Chinese Black Society ties and finds a startling connection to her missing man. But as she digs deeper, she discovers that someone may kill to keep the secret.
Will this dangerous cat-and-mouse game reveal the truth or put a bullet in Sydney’s head?
Chance is the second book in the Sydney Jones psychological thriller trilogy. If you like fearless heroines, page-turning action, and shocking twists, then you’ll love Carolyn Bowen’s gripping story. 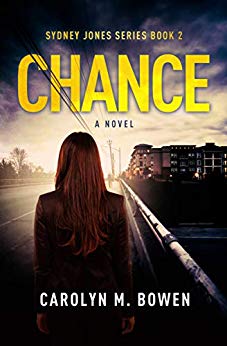 Chance is a gripping psychological thriller that takes the lid off the underbelly of Atlanta, Georgia, the various cultures at play, the sleaze, the Chinese mafia. Adding to the intrigue, the involvement of the CIA. Meet tough, no-nonsense lawyer Sydney Jones, her beefy bodyguard-lover Walker and washed-up rock star Roxanne who attempts to lure Walker back to her side and ends up accidentally dead for her trouble. I particularly enjoyed the complexity of Sydney’s unexpected and unwanted pregnancy.


The narrative has a strong forward drive that makes for very fast reading. Written in third person personal, the story flits seamlessly from character to character in a fluid jump cut style, an approach that takes a moment to get used to but works well. Bowen’s pastiche of character-led vignette’s adds to the tension, lending a sense of urgency. Sacrificed is the deep point of view of the contemporary thriller – this technique applies especially to psychological thrillers – and Chance is light on dialogue and long action scenes, again, key drivers of the thriller genre. Nevertheless, Bowen has deployed a narrative style that captures the reader and keeps them turning the pages until the very end. Well written with good plotting and pacing and enough intrigue and twists to keep you on your toes, Chance will keep you guessing, waiting for the pay off at the end. Recommended to those after a lighter read in the thriller genre. Chance will also appeal to those after strong female leads.
Review by Isobel Blackthorn