The Nature of Reality A Guest Blog Post by Michelle Devon 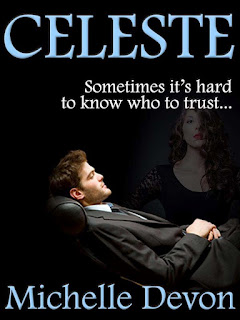 I'm delighted today to turn the board over to Michelle Devon, author of CELESTE. Michelle has a few things to say about reality and perceptions. Michelle, welcome to the Writer's Sanctuary. We all have a slightly warped sense of reality. You should fit right in! ~ Dellani
One of the things I like about being a writer is that I can create my own reality. Sort of. Okay, maybe I can't always create my own reality, but I can create the reality of my characters, who are very real to me. I live with them during the writing process, from creation to the final release of them into the wild.
My family accepts this at face value, and we often discuss my characters as though they are real people. But outside of my immediate family, these characters in my stories are not so real. That creates an interesting conundrum in my life. Let me explain.
One evening, my mother was in town and came for dinner. While we ate, I said something to my friend, Lynn. "Right, like Brent did…"
My mother asked, "Who's Brent?"
I looked at Lynn, looked at my mom, then mumbled, "Uhm, one of the characters in a book I'm writing."
The blank stares are something I'm used to seeing. They've followed me much of my life.
Fortunately for me, the people in my immediate family just nod and get it and that's a blessing for me. I'm not only understood and allowed to do what I love, but I'm encouraged and supported in the doing of it. You can't beat that. It's part of why I call myself a "professional dreamer"… because I'm living my dream, and making a living at it.
But back to reality. Well, not that that isn't reality, but I'm digressing…
I watched a television documentary one night about a woman who had been committed to a psychiatric facility because she was a danger to herself. She saw spiders all over, crawling on the walls, the bed, and worst of all, herself. In order to get rid of the spiders, she'd claw at herself, scratch her skin and face until she bled and was raw. She frequently had to be sedated in order to protect her from herself.
Nobody else could see these spiders. Were they real?
And that's the crux of this whole issue of reality… the spiders were real, at least to that one women. It didn't matter if you could see them or I could see them or anyone else could see them. She could see them, and that was her perception. And in this instance, her perception was her reality. That meant the spiders were real, if only to her.
Ultimately, the goal would be to treat the woman so that she could no longer see the spiders. To bring her to the point where she saw the same things we all saw, or in this case, didn't see.
And how does this all relate to CELESTE? Glad you asked (I know you didn't, but go with me here). I started to think about reality in general, what is real, our perceptions, etc. After all, whatever we perceive as being real is our reality, even if it's not for anyone else. If you think someone is lying to you, your reality is that they lied, even if they were telling the truth. Later, you might have to change your perception and your reality if you learn they were telling the truth, but until you do, your reality matches your perception.
So the story of CELESTE is a story of perceptions, realities that don't match, and having to realign the perceptions and realities when a new perception is revealed. And then perhaps even finding out that the original perception was right all along. When the reality isn't unpleasant—like spiders and scary things—and a person is functional, does it really matter if their perceptions don't match the reality of the majority? And if so, do we treat them to bring their reality in line with the majority, even if it causes pain or displeasure to do so?
These are difficult questions for even experts to answer, and in my mind, that makes them great things to write about in a fiction venue. We can explore these things, experiment with people, if you will, without hurting anyone, and do it in the name of entertainment.
Think about a time in your life when you thought things were a certain way, only to find out later that you'd perceived it all wrong. Realigning perceptions is frequently one of the most difficult things a person can do.
And that is one of the best things about being a writer. If your reality (at least in a story) doesn't work for you, simply backspace, erase it, and rewrite. Would that life were so simple.
Love and stuff,
Michy
Dellani Oakes is Proud to Be a Host for Walker Author Tours!
at August 14, 2012

Thank you for hosting Michy on her tour!

Thanks bunches for posting my guest blog on your tour stop! I love your background and I'm glad I fit in with the insanity! LOL

Sometimes I think about the "erase and start over" approach as it applies to life but when I think of erasing something the domino imact makes me think I would leave it as is so maybe my world of insanity is what I would be most comfortable in!

Maggie, did you see "The Butterfly Effect" with Ashton Kucher?

Right... that would have made such a good book. But yeah, it definitely speaks to the starting over and erasing things and how that adjusts everything else. Good storyline. One of my favorite concepts for a film. Not much in Kutcher, but he did an okay job with that film.

There have been times when I thought I knew something about my life, about a relationship, about how something was... and later found out everything I thought I knew was wrong - completely and totally wrong... and it upended my world for a while until I came to grips with my new perception of "reality". So I totally understand the desire to "erase and rewrite" things the way I wish they would have been, could have been.

I also empathize with Kyle in CELESTE, with the sense of groundlessness he feels at one point in the story... and I love how unsettled the story leaves me!

Way too many people who try to change someone else to match their vision of reality. In the end, the question is "what is real?" Lots of good questions.

Great blog post! Reality is subjective, as any entertainer will tell you. Perception, for all intents and purposes, is reality - and perceptions can be shifted so easily by other people or circumstances.

We learn to adapt - it's our saving grace in life. But what if a few people could erase and rewrite while everyone else adapted without seemingly noticing? What positions would those people hold? Would they be power-mongers, rich, corrupt? Interesting to think about...

Very interesting post. The book sounds like a good read. What is real? We all have the power to create our own path with our actions and thoughts. I have often pondered how certain events in my life would have unfolded if my perception and choices had gone in a different direction.

Not only in real life, but in writing, it's our job to present our personal reality -- or our character's personal reality -- to the masses. And we have to convince others that our reality is the real one. Great post. Can't wait to get my hands on the book.