Today, the bus is zipping over to Arkansas for a visit at the home of Juli Page Morgan.

What genre do you write? Would you consider writing anything else?
*I write romance novels. It’s kind of up to my muse as to what I write, and so far all she wants to give me is romance. And that’s fine with me since it’s my favorite genre to read!

Do you outline and plan or do you let the plot unfold?

*I absolutely cannot outline beforehand. I tried it once, and it was an unmitigated disaster with the story coming out flat and uninspired. So I just let things unfold and surprise me with the way it turns out.

What do you like most about writing?
*I love those time when I think I know where the story’s going, but the characters go off and do something unexpected.

What do you find most difficult?
*Editing! It’s not that I mind cutting things or changing words, but I’m always afraid I’m cutting or changing the wrong things.

What makes a good plot?
*A believable antagonist!

What is a question you'd like to be asked and never are? Answer it.
*Dang, this is hard! I really can’t think of anything. I’ve even been asked in an interview what my favorite euphemism is! (It’s “bumping uglies,” by the way.)

How did you first become interested in writing?
*I’ve always written stories, and tried to write my first book when I was in seventh grade. But I got serious about actually writing and finishing a book when author S.A. Hussey and her friend were writing a story on an internet forum to entertain the rest of us. I loved reading it, and it made me wonder if I could really write that story that had been in my head for twenty years. And after a lot of hard work, it turned into my first book, Crimson and Clover.

What are your current projects?

*I have three in the works right now, but I’m trying to concentrate on the one set in a radio station in New Orleans in the early 1980s. It’s giving me fits, but I’m determined to finish it because I just love the characters and the setting!

*It’s very important to me, because I feel that the way a person speaks tells a lot about them. I do my best to make sure the dialogue in my books is natural and real. I hope I’ve done a good job with it! J 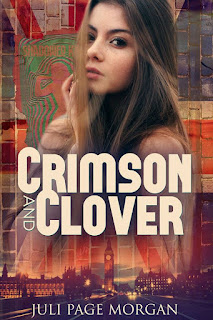 Under Katie Scott’s flower child exterior beats the heart of June Cleaver. Though she digs her bellbottoms and love beads, she longs for the idyllic family life she was denied as a child.
Laughed out of San Francisco’s Haight Ashbury after the Summer of Love for believing rock ‘n roll and white picket fences can coexist she decides to try her luck in the bohemian neighborhood of Ladbroke Grove in London.

When she discovers her new friend Adam is starting a band with Jay Carey, she’s ecstatic. She’d admired the British guitar god from afar for years, and when she and Jay finally meet the attraction between them is instantaneous.

But life with a rock 'n roll star doesn't lend itself well to white picket fences. And when Katie tells Jay the secret she's carried for two years it may end the dream before it begins.


To purchase Crimson and; Clover 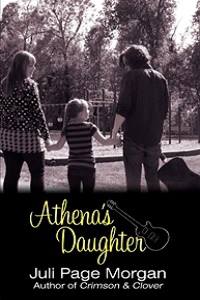 Seven years ago a lie caused Athena Hill to make a hasty decision that hurt the two people she loves most, only they don’t know it. Yet.
When Athena discovers she’s pregnant after her blissful summer in England, she isn’t too worried. After all, she and Derek Marshall plan to get married anyway – they’d already be married if it wasn’t for her visa expiring, sending her back to the States to apply for another one. But when she calls Derek to tell him about their baby, a girl answers the phone; a girl who tells Athena that she is Derek’s fiancée.

When Athena’s sister urges her to forget about a man who would use her and then toss her aside, she’s conflicted. But frightened by her sister’s warnings that such a man might also try to take the baby from her, Athena enters into a hasty marriage of convenience with a man she doesn’t love.

Seven years later, Athena is divorced and raising Derek’s look-alike daughter on her own and regretting not finding a way to tell Derek, even if she could reach him. His once fledgling rock band is now a success and he’s surrounded by security, making contact with him impossible. Or so she thinks until the owner of the record store where she’s manager books the band for a personal appearance.

Now she’s face to face with Derek again, and he’s furious. He was never engaged to anyone else and has spent the past seven years thinking Athena ran out on him without a word. Realizing she was played for a fool, and ashamed for keeping Derek’s child from him, Athena knows she has to make right the colossal wrong she committed seven years ago.

But breaking through Derek’s anger at what he thinks was her callous abandonment of him is harder than Athena thought. That anger is nothing compared to his reaction when she finally tells him about his child, and it destroys the loving connection they’d re-established.

Now Athena’s daughter has the father she always wanted and needed, and Derek is overjoyed to have his child in his life. But even though there’s still an undercurrent of passion and desire between Athena and Derek, he still treats her like someone he used to know. Will he ever be able to forgive her for what she did, or have her past actions destroyed any chance of happiness with the man she still loves?

Juli Page Morgan is a former rock ‘n roll radio announcer who had the great luck to meet and interview lots of bands over the years. During those interviews she heard lots of interesting stories, but it was when the microphone was turned off and they were just hanging out that she heard - and saw - the really juicy stuff! Incorporating these revelations in her books (with names and locations changed to protect the innocent, and often the not-so-innocent!) lets her remember those wonderful people that briefly rocked through her life, and to take her readers on a hard rocking journey full of love, music and happy endings while giving a “backstage peek” at some of the things that really happened.  Her Romances that Rock™ include Crimson and Clover published by Crimson Romance, and Athena’s Daughter from Carey On Publishing.

Juli lives in Arkansas with her husband. When she’s not writing, she’s recording voiceovers for television commercials, remodeling her old house,  and trying to convince her husband the world won’t come to an end if the television is turned off.  She also listens to a lot of music at maximum volume and has never met a speed limit she didn’t exceed.  Juli’s an unapologetic lover of rock ‘n roll, Led Zeppelin guitarist Jimmy Page, and French onion dip, not necessarily in that order.

Dellani, thanks so much for having me on your blog today, and for organizing such a fun blog hop!

I'm so pleased to have you on the tour. I've really enjoyed getting to know you better.