Christmas and a Vampire - Part 1 by Dellani 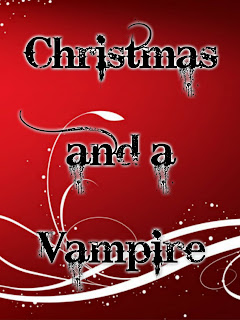 I started writing Christmas and a Vampire as a prequel to a short story I wrote several years ago, called Vampire Hunter. I found that I had more to explore in the relationship of Dirk and Rafaela. After writing this, I realize that I may have to rewrite Vampire Hunter, because the relationship that the characters display in this story is so strong, I have to wonder what would bring them to that place. Or, more likely, I'll write another story to bring them to that point.
My husband suggested the name for this piece. He was watching some anime series and each episode was ____ and a Vampire. He said, “You should write a story, Christmas and a Vampire. It's not two things that you usually picture together.” No arguing with that! So, for your reading pleasure, I present Christmas and a Vampire.
I have shared this story before, but since it's Christmas, and I haven't many Christmasy stories, it's getting trotted out again. Starting today, I will present an episode a day until the conclusion on December 27th. Happy Christmas! Or do I mean, Merry Vampire?
Some of these passages are explicit and not intended for readers under 17. I will do my best to mark them. If explicit sexual situations offend or disturb you, don't read them. ~ Dellani

The hungry orange tendrils leaped higher, igniting the centerpiece—three crucified vampires, each with a stake through the heart. Rafaela De Santos stood back to admire her work. Good lines, perfect symmetry, clearly delineated purpose. It was downright festive with the bright splashes of red everywhere. Icicles hanging from the eaves of the crypt, gave it a holiday flair.
The wood was soaked with a flame accelerating mixture of her own concoction, making the fire extra toasty. With another admiring glance, Rafaela watched the headless bodies crumble to ash as the flames licked at them. The vampire Hunter warmed her cold, bloody hands on the blaze.
"Should have brought marshmallows."
Satisfied the bodies were completely burned, she added the gunnysack of heads. She left nothing to chance and had never believed in half measures. When she killed a vampire, it stayed dead. None of this ridiculous, humanitarian treatment for Rafaela. That might be all right for some of the younger Hunters, but she was Old School. Stake the vamp, cut off the head, burn 'em up and burn the heads. Cheap, effective—permanent.
Satisfied it was a job well done, she headed back to her car. A rustle in the bushes nearby might have been from a hungry fox following blood scent, but she knew better. Arming her crossbow would take too long, so she faced her opponent with her handgun and specially made bullets.
He strode jauntily out of the bushes, dusting his hands on form fitting, black leather pants, the smile, as always, disarming, His slight over bite emphasized the lengthy canines as his full lips drew back.
"Rafaela, I'd know the scent of your lethal brew anywhere. Still as inflammatory as the last time we met?" He moved forward and to his left.
"I'm nothing if not consistent." She countered his movement cautiously.
"So true. Did you have to burn them all? I'd just added the girls to my harem. Very tasty bits—AB negative." He licked full lips.
"I thought I caught your stench on them."
"There was a time when that stench aroused you, Ella."
She couldn't deny it. She had found him charming – once.
"Do you ever stop?"
"Stop what? Loving you? Admiring you? Wanting you?" His voice dropped in pitch with each question.
Suddenly, with the inhuman speed of the undead, he was beside her, hand in her thick, black hair. Her neck stretched to one side as his fangs extended. The prick of a sharp point against his ribs, reminded him that Rafaela was no mere human. Her heightened senses and unique abilities had kept her alive nearly as long as he.
"What made you turn on me, Ella? I thought you loved me."
"I did. Until—Calais. Somehow, when your lover feasts on your entire family, making you watch helplessly, he loses some of his allure."
He nodded, having anticipated that response. "Mom sends her regards."
"Neat trick, since I killed her last month."
He raised an amused eyebrow. "Really? I had no idea you'd caught up with her."
"Does it give you some sort of obscene pleasure? You destroyed my life, Dirk."
"You're ruining my un-death, Rafaela." The amusement left him.
"My heart bleeds."
They stood together, eyeing one another with mixed admiration and lust. It was always like this with Dirk, ever since they met, nearly a century before. Rafaela had the skill and power to kill him. He had the blood lust of a demon, bent on creating chaos from order. They stared at one another a few minutes more before turning away.
"One day, it won't be so easy, Dirk," she tossed over her shoulder.
"I know, sweetheart." He disappeared in a puff of brimstone scented purple smoke, a neat trick he'd learned from Houdini.
Rafaela drove back to the B&B where she'd been staying. It had the advantage of being owned and well guarded by werewolves. Not everyone could appreciate that fact, but Rafaela wasn't like most people. Dirk despised werewolves, so the likelihood of him pursuing her was minimal.
When she got to her room, she stripped off her clothing, putting it in an industrial strength garbage bag. A long, soaking bath got the fanger stench off her and the blood out of her hair. The clothing would end up in the industrial incinerator at home.
After her bath, Rafaela examined herself in the full length mirror. She did this to check for any damage the vampires might have inflicted. Her pain tolerance was off the charts—a plus, when dealing with the undead. However, she didn't always notice an injury until much later. There was a nasty laceration on the back of her left thigh, a place she'd never be able to reach on her own. Fortunately, the innkeeper was also skilled at stitching people up. Claudette arrived with a full medical kit moments after Rafaela called for her. Her long, black hair fell around her like a waterfall as she glided across the room.