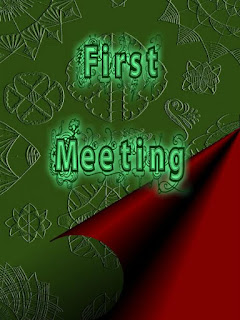 It's the early 80s and Janet Yarkowsky is in finishing up her college degree at Texas Tech University, in Lubbock, Texas. She's not really looking for love, having a high school sweetheart whom she loves. But he's in the service and she hasn't heard from him in months. So when another man makes a play, she's not entirely averse.

Someone sat in the chair to her right. His scent drifted to her nose. He smelled like outdoors and hot, sexy male. Janet squirmed uncomfortably, hiding it as shifting her position in the chair.
"Vonnegut fan, huh?" He had a deep, husky voice laced with an Southeast Texas twang, not the West Texas drawl. "I was a little disappointed with that one. I have to say Slaughterhouse-Five was my favorite."
She glanced at him over the top of the book. He wasn't looking at her, he was staring at the fountain.
"As far as war books, I found Catch-22 much more interesting. But I think Heller had some serious problems...."
"Did you want something?" Janet tried to keep her voice level, neutral, but the more she looked at him, the more interesting he became.
"Yeah. A chance to go out with you."
Janet laughed loudly, muffling it when people shushed her. "You're gonna get me in trouble."
"I could get you in all kinds of trouble, but only in private," he replied with a cocky grin. "Theodore Macy. Most folks call me Tex." He held out his hand to her.
"Isn't that a little redundant. We are in Texas, after all." She didn't take the hand or introduce herself.
"I did my undergrad in New York. Wasn't quite so redundant there." He shrugged. "Hello, Tex," he said in a silly, girlish voice. "My name is...?"
Giggling, she took his hand. "Janet."
"No last name?"
"Just Janet will do."
"Just Janet, I'm a persistent cowboy. When I see the prettiest girl in the library sitting by herself, I have to ask why."
"Maybe I like being alone," she said quietly, going back to her book.
"And maybe you just didn't have the right guy come up and talk to you."
"Or maybe," she said sternly. "I like being alone."
"Nobody really likes being alone. You wouldn't come here if you wanted to be alone. You'd go lock yourself in your dorm room."
"I live in town."
"Even better."
"With my parents."
"Bummer. Suddenly my pants ain't smilin'...."
Raising an unfriendly eyebrow, she eyed him. He was good looking. Sandy brown hair, body bronzed by the sun, eyes the color of sage, chiseled jaw, nice physique.... She glared at him and went back to her book.
"Aw, come on, Just Janet. Cup of coffee.... You're a college student. We live on coffee."
"Are you ever going to go away?"
"No. I told you, I'm a persistent cowboy. Come on. How bad can it be having coffee with me?"
Janet had to admit that the idea held appeal. He was good looking, friendly, charming... persistent.
"Okay. Coffee. But that doesn't mean I'm giving you my number."
He chuckled, standing up. "Doesn't mean you won't...."
She grabbed her backpack and they walked together to the front doors. There was a coffee shop within walking distance, so they headed there. Sitting together at an inside cafe table, they watched the sky turn dark and nasty. The wind picked up and they laughed as a dozen tumbleweeds chased one another down the street.
"Should have brought my umbrella," Tex said with a sigh. "Can't offer to keep a lady dry if I don't have the means."
"We can sit here and try to ride it out," she suggested.
Tex shook his head. "This one's got staying power, believe me. Could be a few hours."
"How can you possibly tell?"
"Got myself a feeling. And almost six years of meteorology studies behind me." He grinned as he took a sip of his coffee. "Born during a hurricane, I grew up in Corpus Christi and I've watched the weather for over twenty years." He stared at the gloom with a soulful smile on his full lips. "Something about Mother Nature. You can't tame her, you can't predict her. Got to give up and let her do her thing, ride it out, let it happen...."
Janet watched him watch the weather. The color of his eyes picked up the gray and yellow in the sky, turning them a dark, mysterious brown. He felt her stare. Smiling nervously, his bronze skin took a rich copper tinge.
"Sorry. For me, this is a rush. I do storm chasing."
"Storm chasing?"
"Find a storm cell and follow it. Not even sex gives a rush like following that tornado, waiting to see where it will go."
"You follow tornadoes? Are you high?"
He laughed loudly, setting his cup down with a click. "Not at the moment. You?"
"I don't do drugs. Never have."
"Do you have any vices?"
"One or two," she flashed a secretive smile over her coffee cup.
"Oh, baby, would I like to find out what they are."
© 2017 Dellani Oakes
To Buy Dellani's Books
For More About Dellani