First Meeting from Sea of Destiny 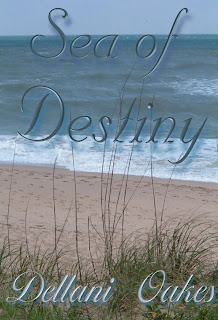 Kyle Scott is a young widower with three children. His wife died about a year ago from ovarian cancer. Stressed out and depressed, he's not doing well at work, so his boss insists that he take a vacation. He, his three children and the nanny, Carmelita, embark on a cruise to Mexico and Belize. Their first night on board, he meets someone new.

The first course had already been served by the time a solitary person entered. Dressed rather like a gypsy in brightly colored, flowing skirts, blouse and shawl, she walked slowly to the table taking the empty seat next to Kyle. The waiter brought her food as well as a glass of iced tea with mint without even asking her. She accepted each with a stately inclination of her head.
She wore a multicolored scarf tied tightly over her head. No hair escaped and her scalp looked smooth beneath it. Her eyebrows were just growing in, her complexion pale, almost pallid. Kyle knew that look well. This was a woman who had been through chemo.
She was much taller than she looked walking in. Kyle guessed her to be around five nine. What had once been a strong, athletic body was ravaged by her disease and treatments. However, she was still broad shouldered with the build of a swimmer. Her eyes held a spark of determination as she smiled at him, extending her hand.
"Emily Geraci," she said quietly, her voice slightly hoarse.
"Kyle Scott." He took her hand gingerly. "This is Carmelita Porter, my housekeeper.
And my three children, biggest to smallest; Cindy, Randy and Mindy. Kids, Ms. Geraci."
They all said hello, smiling politely. Carmelita grinned at her, dark eyes sparkling.
"I love your scarf," she said. "The colors are just wonderful. That purple really sets off the green in your eyes."
"Thank you," Emily smiled shyly. "Normally, I have hair.... Raven black, thick...." She replied wistfully.
"You don't need to explain," Kyle said quietly. "You look beautiful without it."
"Thank you." Her smile was cautious.
They made polite dinner conversation. Kyle found her quick witted and nearly as sarcastic as he was. He enjoyed her scathing critique of the drive over from Orlando.
"Did you drive yourself over?" Carmelita asked.
"Not quite up to that yet. I took the company shuttle. Not the most comfortable trip, but at least I didn't have to worry about the traffic. People in Orlando are idiots on the road."
"True of any big city," Kyle replied diplomatically.
"I guess, but it seemed like everyone in Orlando was completely insane."
Kyle chuckled. "I guess it seems like that sometimes."
"We're from Orlando," Mindy said. "Daddy says Mickey Mouse lives there too."
"Really? Have you seen Mickey?" Emily replied, eyes big with wonder.
"Lots! Mommy used to work for Disney. We went all the time."
"What fun! I've never been. It's on my list after I skydive and rappel down a mountain."
"Any particular mountain?" Kyle asked with a smirk.
"Any that presents itself. I figure I'll have to go out of state, however. There aren't too many mountains in Florida."
"Not any I've ever seen," Kyle replied with a smirk.
Dinner was cleared and Carmelita took the kids back to the cabin to change and watch a movie.
"Don't be too late, Mr. Scott," Carmelita reprimanded. "You need to come tell the kids goodnight."
"Thanks, Lita. I won't be long." He frowned at her behind Emily's head.
© 2017 Dellani Oakes
To Buy Dellani's Books
More About Dellani

Sea of Destiny can be read in parts on the Cereal Authors blog
at June 22, 2017